The Winter of Our Discontent

"Now is the winter of our discontent made glorious summer by this son of York." Shakespeare, Richard III

After the weekend at Summit Point it was clear I needed to continue racing (as if there had ever been any doubt). Also blatantly obvious was that I would need to step up my game. These WERA guys did not screw around and if I wanted to be competitive, my bike, body and brain would need to be on point. I had the winter to do so.

Body was the least difficult of the three, I upped my workout regimen from four times a week to six and concentrated on eating properly. The program was effective enough that I had to have my new leathers taken in. Whenever things seemed to get easier, I would add on more repetitions, new exercises or longer duration for cardio. I needed the endurance to run several races a day at full pace as well as bump-starting the motorcycle each time without fatiguing, not to mention loading, unloading, wrenching and doing all the driving to and from the track. Oh yeah, and work a full-time job to afford to do all that!

Brain might be the most difficult of all. There is a fine line to tread mentally speaking in regards to racing. You have to be focused, serious and ready, but at the same time relaxed, flowing and enjoying yourself. Get lazy and guys you can beat will smoke your ass, get too keyed up, make stupid mistakes and maybe end up sliding across the pavement on your head. Intimate knowledge of the racetrack is critical, but waste too much brain space on one corner and you will botch the rest of them. I studied, watched videos and read everything I could about the tracks we would visit next season. I made lists, budgets and cached spare parts for any contingency. However prepared you might think you are, racing always has a few curveballs to throw when you aren't looking.

I agonized over what to do with the bike. It needed improvement in all areas: power, weight, handling, brakes. The biggest issue I currently faced was tires. The wheels I ran could not accommodate proper sized racing slicks. I could continue to run the "Racing Street" Bridgestones, they were cheap enough, but they put me at a huge disadvantage as the other racers were running slicks and tire warmers. My answer came from the same source that got me into this mess: Craigslist.

I saw the ad for an "EX500 Parts Bike $150" during my lunch hour. I could tell from the blurry cell phone photos that there were some nice parts on the machine, not to mention the nice price. I contacted the seller to tell him I would take the bike and that I would be there within the hour to pick it up. He said he already had over 25 emails, I told him I had the $150 cash, no haggling, he agreed. I then contacted my boss to let her know of the "emergency" I had to take care of toot suite and I was on my way, heart beating like going out on a first date.

As I loaded the machine into the back of my truck I did a cursory exam and knew I picked up a good deal on what was obviously a former race bike. Someone had installed a CBR600 F3 complete front end including the wheel and a ZX6 aluminum swingarm with a CBR600 F3 rear wheel. Those items would solve my tire issues, and all the machine work had already been done. Not to mention the Woodcraft rearset footpegs, Muzzy stainless exhaust, Fox Twin-Clicker rear shock absorber and whatever good parts the engine itself might yield. This dog's ass thought he felt a little ray of sun.... 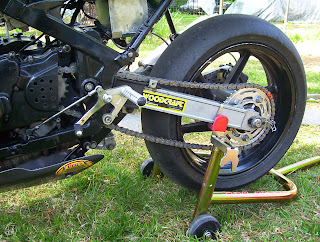 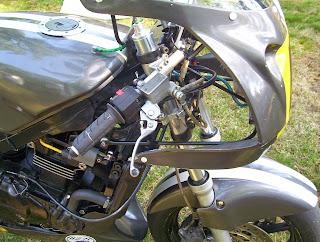 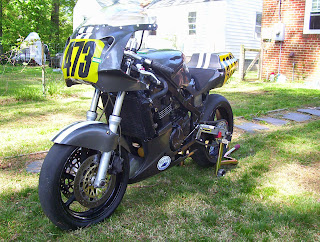 Posted by Kris Larrivee at 6:03 AM