Long before the current cafe racer/bobber/flat tracker vintage bike trend that has every monkey with a hacksaw thinking he is a bike builder, there was Phil. Before the hipsters were old enough to grow a beard or even think about wearing glittery metal flake helmets, there was Phil.

He raced a BSA Goldstar at scrambles and flat track events during the early 1960s, was the first to compete on a Japanese motocross bike when everyone was still enamoured of the British Empire's offerings ("Damn thing handled so bad and had so much power, it was always trying to kill me."). He came from the hardscrabble farm life in Upstate NY, did a brief stint in the Navy and worked at the local Kraft cheese plant before hanging out his shingle in the small engine repair business. He soon earned a reputation for being able to fix things other mechanics could not. His out of the box solutions had some detractors calling him crazy. Phil's genius was the ability to look at a problem sideways and come up with an elegantly simple answer that would leave the engineers and mathematicians wondering why they didn't think of that.

He said lawn and garden work was the bread and butter, allowing him to pursue his first love: motorcycles and other motorized toys. I believe his love of riding/competing was rivalled only by the love of building them. And build them he did. He stripped down motorcycles to their bare essentials and tuned them until they functioned better than the designers could have hoped for. He put car engines into snowmobiles, and turned snowmobiles into wheeled vehicles. His machines had a brutal beauty, almost puritan in their honesty and rigid in their purpose. They had to work, and work well. And they couldn't cost much.

Phil's work was a constant attempt to buck the system. He refused to accept that big money had to be spent to have big fun or be competitive and quite often he was right. He took particular delight in showing up at the local snowmobile drag races with, to use his words, some "weird harold piece of shit" and kick some ass. They might have laughed as he unloaded the machine from his two-wheel drive Toyota truck with no power steering, but no one laughed after they saw him run. I remember the gasps of amazement from the crowd as the "yellow thing" took off down the track. I recall my own sense of pride as I thought, 'That is my friend.'.

There are a million stories like that, I am grateful that I got to be a part of even a few of them. I am also thankful that I became caretaker to one of Phil's machines. "Modified" by Phil in the mid 1990s, it began life as a 1970s Kawasaki KZ400 twin-cylinder streetbike, a beginner's ride with the typical Universal Japanese Motorcycle styling of the day. A pedestrian and quite forgettable bike: Not so after Phil turned it into a dirt machine for himself: 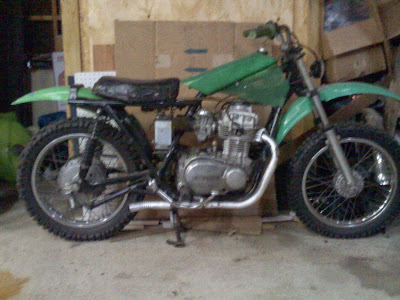 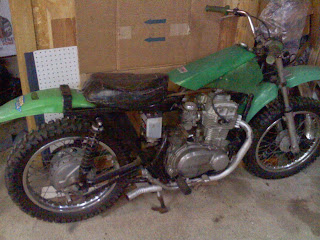 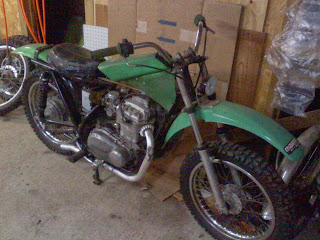 Barely muffled, sporting knobby enduro tires and no front brake, this is not a machine for the faint of heart. The weight is under 300 pounds and it carries it low, which makes the handling quite nimble, and the balance is superb. Power is instant from the well-tuned carburetors and is more than adequate for playing off road and while boasting a top speed near 90 mph. The gas tank is from a Jawa moped, shocks from a 1000 Kawasaki and exhaust turnouts from NAPA. Obviously you won't be hucking this over any triple jumps, but as an affordable fire roads bomber, it fits the bill. Phil confessed he had less than $300 in building the machine, including the purchase price.

You see, Phil understood that at its core, a motorcycle is just that, a motor and two wheels. Strip away all the faff and plastic, bold new billboard graphics, shitty chrome, GPS, LEDs, 0% financing and you are left with the heart: a simple conveyance of internal combustion with the power to move men's souls.

Bless the mavericks, for without them, who would show us the way?
Posted by Kris Larrivee at 8:37 AM