It was a long way to go and a lot of crap to deal with for a six by nine inch simulated wood-grain plaque with a single color stencil announcing me as the third loser in race soon lost to the annals of time, but it was my goddamn 6 x 9" simulated wood-grain plaque and nobody was going to take that from me. I had earned that stupid thing and it was going to go in a place of honor on my mantle so that I could trot out this interminably long narrative you are currently reading for anyone willing to listen and a few who weren't. That is if I ever got home, there was still the matter of the narcoleptic Snap-On truck.

I pulled out of that sweaty racetrack without too many goodbyes. I did not have the energy, and I knew I would need to save it for the sweltering trip home. My right foot had previously been partially roasted from sitting next to the engine cover in order to operate the gas pedal. Inevitably the truck died about an hour from the track. It was dark, I managed to limp it into a sketchy looking motel parking lot. I grabbed my flashlight, determined to figure out what the hell was going on with this jalopy.

I tore the doghouse (engine cover) off in a frenzy and started looking for the problem. My eyes were drawn to a rusted piece of steel tubing, maybe 3/8" diameter, laying against the exhaust manifold, as I followed the steel tubing I noticed it connected to black rubber line on both ends, held with hose clamps. That black rubber line looked suspiciously like fuel line. I hopped outside the truck and popped the hood to look at it from the other end. Sure enough that rubber line went into the carburetor and I knew that the other end had to run to the fuel tank/pump. So instead of purchasing enough gas line to do the job right, some cheap stupid dipshit decided it was a good idea to use a piece of steel line and run it right across the freaking exhaust manifold! In the heat the gasoline was boiling in the damn line! No wonder the thing kept dying, it's a miracle I didn't go up in a ball of flame on the side of the highway.

The next hour was spent making an improvised heat shield out of an aluminum baking pan I bought from a dollar store and safety wire. I took the header wrap off the race bike's exhaust, wrapped the fuel line from one end to the other and zip tied it out of the way as best I could. I got it started, put the pedal to the floor and didn't let up until I absolutely had to.

I pulled into my driveway sometime in the desperate hours before dawn, a bleary eyed rheumatic golem. There would be no welcoming committee, no trumpets to herald the hero's arrival, not even a write up in the local rag. Monday would bring a return to the vapid drudgery of work amongst the other automatons in an attempt to accumulate wealth. But there was the next race, the next lap, the next green flag. And that was something. 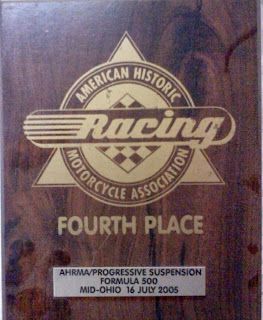 My very own 6" x 9" simulated wood-grain plaque (dust and fingerprints sold separately)
Posted by Kris Larrivee at 5:38 AM