Life continued this way for a few years. I rode street bikes during the summer and snowmobiles during the winter. I briefly thought about marriage and children but then came to my senses. I purchased a 1982 Yamaha RD350 LC that turned into a huge money pit. If I couldn't race, I would at least create the sound of a racing two-stroke for all to hear. I was lulled into a false sense of security and complacency. Racing still gnawed at my gut like a rat, but a quick kick would make it scurry back into the corner for a bit, staring at me with skulking, violent eyes.

The writing was on the wall, but this myopic vision failed to heed. My internet motorcycle parts business started to fail. After ten years of relative success being my own boss the days were now numbered. I worked twice as hard for half as much money, what once had been a joy degraded into a tooth and nail skirmish just to rub two nickels together. A sentence for execution had been handed down, there would be no last minute stay, no reprieve.

While northern New York State possesses incredible natural beauty, it is a shit-hole of poverty, drug use and ignorance, a cesspool of wasting forgotten humanity. There are very few opportunities, crushing taxes and an oppressive good old boy network that god help you if you are not a part of. I did it my way for as long as I could, but the piper was playing the tune, and dues needed paying. I left New York for the second, and last time.

I had a basic idea of what to expect when I accepted an employment offer in the urban South, the second capital of the Confederacy: heat, humidity, traffic, population density, but coupled with that was a fighting chance and maybe hope.

While the south did not fail to deliver on my preconceived notions, I soon became painstakingly aware of how much slower things moved here. There was less urgency, now was not as important as some time, things got done when they got done. For someone whose main focus was doing a thing as quickly as possible, the slow pace was almost interminable. I found myself longing to explode out of the 9 to 5 drudgery and push right to the edge just to feel something other than boredom. 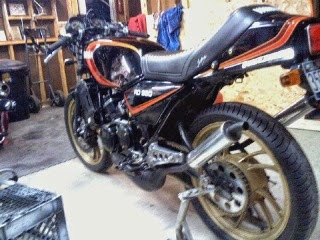 The money pit RD that failed to fill the void.

Posted by Kris Larrivee at 7:28 AM