In August 2007 I threw away a roadracing championship at the top of Turn 2 at Mosport International Raceway near Toronto. In practice.

I came to Mosport confident that I would finally win a championship. After several second place championship trophies, I was hungry for the top spot. It was going to be the culmination of years of effort on a motorcycle they said couldn't do it by a rider who did everything the hard way. It was close enough for me to taste it. It didn't happen. I left Mosport with a bent motorcycle, broken bones and broken dreams, but at least alive.

The bike was absolutely flying in morning practice, I had the quickest lap times for my class. Any finish in the top 3 would clinch the title, despite there still being another race on the schedule, no one would be able to surpass my points lead. The bike was better than it ever had been and I was feeling good, even though I had put on some weight over the last few years and the leathers were getting a bit... ahem....snug. Far behind were the days of cracked cylinder heads and piston failures, I had done my homework, and the results reflected it.

I didn't think much of it when I saw the slower rider in front of me as I exited Turn 1. My original plan was to pass him on the inside as we exited Turn 2 by simply tightening my line a little bit. It was a good plan until I realized just how slow he was actually going. I was closing at least 20 mph faster than him, and he was right on my line. I knew there were riders behind me, so clamping on the binders was not an option without getting ass-packed.

Turn 2 is a blind uphill crest to downhill that is tricky to do at speed. My turn in point was always just before the crest, about mid-track. You can feel the suspension unload as you crest the hill, then compress again as you head down the other side. I always left some room on the outside in case the bike ran a little wide on the exit. I was moving along very quickly and knew that jamming myself up the inside of this slower rider might result in a bad experience for both of us, so I widened my line by no more than 24 inches and moved my turn in point up about a half bike length to leave us both enough room.

This was all the space bad luck needed. By moving my turn in point up those few feet, I attempted to lean the bike over as the suspension was unloading. The front tire made a small howl like a dachshund being run over, and all traction was lost. I remember feeling my collarbone snap as my left shoulder hit the pavement, my elbow bashing into my ribs, breaking them, my helmet grinding along the pavement, sliding, then tumbling, then sliding again and finally my foot catching on something, ankle popping, ground, sky, ground, sky. Then darkness.

When I came to there was only dust, blocking my vision, choking my breathing. I was certain I had just crashed my dirtbike at home. I heard voices and realized I was not alone, but for the life of me I didn't know where the hell I was. It wasn't until the voices began talking to me that I discovered it was an ambulance crew, and they were actually talking to me. The crew later reported to my then girlfriend that I said two things: "How is the bike?" and "There goes my fuckin' championship." I do remember fighting the EMTs as they tried to cut my leathers off. I couldn't afford another set if they shredded these to ribbons. It was agony pulling my arms out of that suit with a broken collarbone and broken ribs, but the early effects of shock helped to dull it slightly.

No championship, no glory, just grit in my teeth, pain and the realization that if you ask "How much should I give?" racing's only answer is more, more, more. 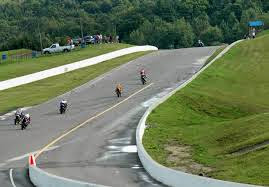 Up the hill into Turn 2