It appeared the remainder of my 39th year would be spent riding around aimlessly at trackdays, but plans were hatching for next season.

WERA (Western Eastern Roadracing Association) held races at several tracks within a few hours drive, namely Summit Point and Virginia International Raceway. They agreed to accept my prior race experience in lieu of taking their race school, provided I returned as a Novice for the first season, which was amenable to me.

I planned, budgeted and trained. The first race at Summit was in May 2014. One weekend before that there were two trackdays, both running on the Main circuit. The trackdays would be perfect for blowing out the winter cobwebs and learning the track before racing. I had all winter to get the bike and myself ready. This was it.

Then, as so often happens with racing, things changed. WERA had a scheduling conflict that forced them to move a race weekend to late November 2013 at Summit Point. Could I make it happen? Before the clock struck the big FOUR OH? How sweet that would be, and what a motivator, to get that homecoming race under my belt before I was officially over the hill.

There was still the matter of licensing fees, an oil containment belly-pan, safety wiring, tires, time off, but to hell with it, I was going racing! 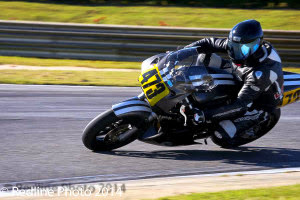 Posted by Kris Larrivee at 7:41 AM