Dark Was the Night, Cold Was the Ground 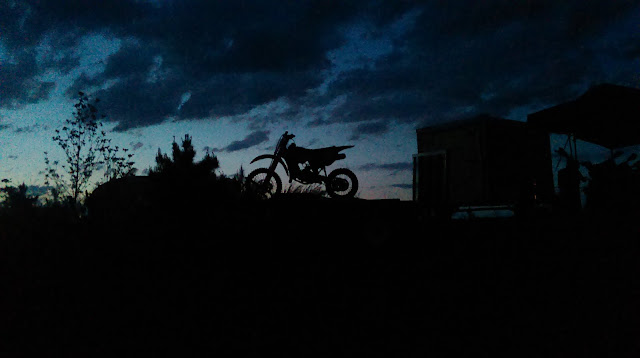 Dark Was the Night, Cold Was the Ground (link)

This image made me think about the recording of the song linked above that is floating out in space on the Voyager craft, 13,135,477,733 miles from earth at the time of this writing.  A long way traveled.

If I ever get off this killin' floor,
I'll never get down this low no more


Halfway through this ridiculous race.  Something is wrong with the front forks.  The bike is trying to fucking kill me.  My legs are giving out, my head is starting to swim.  I want to puke, but I'll never get my helmet off in time.  Five minutes after the thing started I remember thinking, "this is not any fun".  The very next thought was "then it's time to hang it up, get the hell out of dodge, leave the wicked bitch of racing behind".  As we age, we dream less and old dreams die.  Thoughts of giving this one the Kevorkian treatment flood an addled brain.

I've spent the last hour trying to get out of that headspace while my body collapses into itself.  Briefly the thought flashes of ditching the bike in the woods and walking until I fall off the face of this smouldering planet.  But I'm not wearing any underwear beneath these padded Lycra biker shorts, so that's out.  Continue languishing around in an embarrassing 12th place, wondering where it all went wrong.  The pity party ends in a moment when it dawns that I am alone in the woods.  There are others ahead.  And behind.  But no one right here, right now.  Except me.  There is nothing else.

There is no quit.

There is only death, or finish.

Fuck it.  Twist the goddamn throttle.

-Bob Dylan, The Gates of Eden


I have nothing to say today except, if you should find her, let this sparrow know.  Thanks.

"Avoiding danger is no safer in the long run than outright exposure.  The fearful are caught as often as the bold." -Helen Keller

My whole life I've heard the same thing, "Let Larrivee do it, he's not afraid of anything!"  From the rickety cinder-block and plywood ramps we used to collapse with our BMX bikes, to a quarter century on a skateboard, stock cars, snowmobiles and of course motorcycle racing, it's been the assumption lots have made.  But they would be wrong.  There's been fear the whole time.  Along with plenty of broken bones, injuries, surgeries.

I am neither proud, nor ashamed of, my scars.  They live with me.  And I live with them.  My face does not light up to tell their tales.  They serve as a reminder of how truly lucky I have been and my friends who haven't.  The maimed, the mutilated, the broken.  And the dead.  I'm sure they had fear as well.

The main difference, I believe, between those who grid up, who take any sort of a risk outside of the norm and the rest, is that they refuse to be ruled by this fear.  Some call it courage, others call it stupidity.  Either way, it marks the distinct schism between the few who will, and the many who will not.

But those who make decisions based out of fear...are already dead.

"We are all alone, born alone, die alone, and- in spite of True Romance magazines- we shall someday look back on our lives and see that, in spite of our company, we were alone the whole way.  I do not say lonely- at least, not all the time- but essentially, and finally, alone.  This is what makes your self respect so important, and I don't see how you can respect yourself if you must look in the hearts and minds of other for your happiness."


I've logged quite a few miles on motorcycles over the past thirty years.  Two cross country trips, countless runs up and down the East Coast, not to mention the countless hours off-road.  And you know what?  Most of them have been alone.

It wasn't planned that way, I didn't set out to fly solo all of the time.  It just kind of happens.  After a while you get used to it.  You get to like it.  Crave it even.  And the thought of someone intruding on that solitude...just seems wrong.  I've been more selective about my riding partners than my sexual ones.

I guess that says something about priorities...

I fired the street bike up for the first time in over a month yesterday.  It was covered in dust, and I could just feel the reproachful vibe the Suzuki was giving me after all that neglect.  The weather had been shit for weeks, but mostly I had been lazy.  Taking the easy way everywhere.  The four wheeled way.  But like an old friend that's always there when you call, the engine came to life, four cylinders greedily gulping the highly combustive fuel/air brew they'd longed for.

I looked at the most recent modifications I'd done to the GSF1200 Bandit in an effort to make it more commute friendly.  Better mirrors, quieter exhaust, new seat cover, I even wired it to run my new expensive heated gear.  There had been a reason for all these upgrades.  A special one.  One I figured putting on the miles for.  Like so many reasons that seem important one day and gone the next, this too evaporated like a puddle of rainwater under the noonday sun.

The blog has never been a place for too much personal business.  I figure if you want to read about people's private shit you can swim over to the sinking ratship of Facebook and get your voyeuristic fill of fuckwads.  Speed of Arrival is about my experience with motorcycles and racing and the lessons I've learned doing it.  But life bleeds over sometimes.  It's inevitable.

2017 was a shit year.  And the first third of 2018 hasn't been much better.  Too much loss, some that was written about here, some that will remain unspoken.  Death, disappointment, failures, promises broken, dreams dashed.  You know, typical life shit, no different than anyone else.  But it certainly starts to add up after awhile.

So what does it all have to do with motorcycling?  Give me a minute, I'll get there.  In the types of racing I've done, (roadracing, now hare scrambles), there is always more than one lap.  More than one chance to get a corner right if you fuck it up the first time.

There is only one lap to life.  You can't spot your landing before you jump.  And most of the turns are blind.  A body rails around them once, hoping to make it through to the next.  And there are always more unknown corners ahead.

I am very thankful to have taken at least a few of them on a motorcycle,in spite of the crashes.

It's gone a long way towards making this one lap worthwhile.

I think I'll go for a ride.

Posted by Kris Larrivee at 5:37 AM No comments: