I survived the first track day, and several subsequent ones. While enjoyable, they were not entirely fulfilling. Many of the participants were not particularly friendly, aside from a snide comment or two along the lines of, 'An EX500? My girlfriend used to ride one of those until we got her a real 600.' Very funny. I watched as the dick waving horsepower junkies wobbled around in the corners, got the bike perfectly upright and then opened the throttle to blast down the straightaways. Granted there were good riders, but there was a lot more talking about it than actually doing it. They seemed happy to play the part of racer, without having to actually back it up in the crucible of competition.

Braggadodico does not survive well in the racing ecosystem. Motorcycle competition is far too humbling an endeavor to allow for much bullshit. Just as the racing motorcycle is stripped down and all that is deemed unnecessary pared away to lighten and simplify, so streamlined must be the attitude and approach to racing. Spartan, uncompromising and above all prepared for anything. Results speak for themselves, anything else is just wasted air.

I decided to look at these trackdays in a different light, not as stand alone events, but as preparation to return to racing. After six long years away, I knew where I wanted to be: lined up on that starting grid ready to find out if I still had it in me. 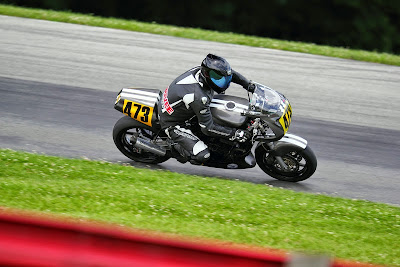 Posted by Kris Larrivee at 5:13 AM