Down The Rabbit Hole To Hell

I raced one more time that year after getting the frame on the Suzuki straightened. It was bittersweet. I scored a third place, but the decision had been made. I would not return to the race track for the foreseeable future. There were many reasons, mostly financial, some personal.

Things changed. The blue collar guys left the sport as the economy tanked, people got divorced and remarried, died, real life stepped in. It was not the same bunch of friends it once had been, the new crop had more money, was more cut-throat, less likely to help a fellow racer out, more likely to talk shit behind his back. (True story: the new guy I shared a ride with to Mosport the weekend I cart-wheeled it down Turn 2 spent the weekend telling people he was lucky he "Got the gas money from Larrivee before he crashed", after I was carted off in the ambulance. The new executive members of the race organization did not appreciate my 'colorful' style. It felt like hanging around the same small town after graduating high school and everyone else had moved away. You simply were no longer welcome.

Eventually, even I can take a hint, although it might take the entire universe screaming at me to hear it. A laundry list of injuries had piled up since turning thirty. It was like hitting some sort of reverse lottery, with yearly installments of pain:

2005: Broken elbow, severe road rash to elbows and back

2009: Dislocated carpal lunate bone in left hand with damage to the median nerve requiring surgery and pins. Ended up with antibiotic resistant bone infection that lasted over a year, then severe reaction to antibiotics. Seven doctors, five surgeries and most of my sanity later the majority of my wrist bones were removed. Doctors wanted to do two more surgeries to plate the wrist, I told them to piss off as I was tired of quacks cutting into me.

Every time I thought I had finally hit bottom a trap door would open and send me down the rabbit hole back to Hell. I was physically out of shape and mentally exhausted. Obviously there was very little pity from me or others, as this crap was all self-induced, it was like a giant "I told you so". To continue on in this manner was surely suicide. I needed to back away from the breach and catch my breath, lest I catch something much worse. There was unfinished business with racing, but it would have to wait. The end came. For now. 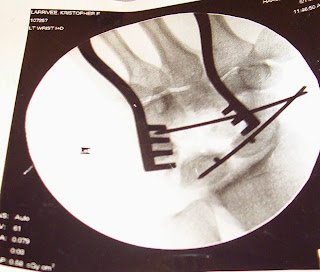 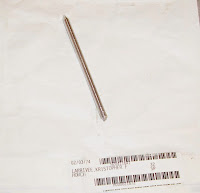 Some of the various hardware installed in me over the years. No, I'm not proud of any of it. I wish it had never happened.

Posted by Kris Larrivee at 5:18 AM