I found a set of very used tire warmers on the WERA classified board for $100 shipped. They worked, sort of, but the rear one was hit or miss. I finally cut into it and found a broken wire. This repaired they worked fine.

The CBR forks were leaking, so I knew they would need a rebuild. The brake calipers also had seized pistons, which also meant a rebuild. The master cylinder was questionable, so a suitable replacement had to be found. The dollar signs started to add up.

The motor needed freshening as well. I had a low mileage bottom end that did not require attention, but had to send out the cylinder for boring and the head for new valve seats. Luckily I found a retired EX500 racer known as FOG (Fast Old Guy) who was a machinist with very intimate knowledge of how to make an EX go fast. He also had very reasonable hourly rates and plenty of earthy wisdom ("All you have to do is get the idea into your brain that you can dive into the worst corner in your life with no hands on the bars with blind faith that the bike will turn and not fly off the road into the bushes. Get past that and you've got it licked. Oh yeah it'll feel the same but you'll be going much faster.") -FOG

It was a very busy winter putting this all together and making it work. The problem with building a hybrid type race bike such as this is that not only does everything have to fit together properly, but it also has to work well at maximum speeds/lean angles safely. That is the difference between putting together a race bike and some Orange County Chopper crap. Fluffy, candy painted, chromed penis extensions that require a runway to turn 180 degrees, nothing more than status symbols completely lacking in function would never cut it on the race track, they don't even work well going around the block.

A race motorcycle has to go, stop and turn. Well. That's it. There is a beauty in that sparseness and the resulting lack of ornamentation that leaves no room for 300mm wide tires, LED lights and stormtrooper helmets with plastic mohawks. Even the paint schemes on competition machinery serves a purpose: to represent the sponsors that make the racing possible. In a cream puff costumed world of frippery and frivolity, it is refreshing to see bare bones machines with a singular intent: To win. 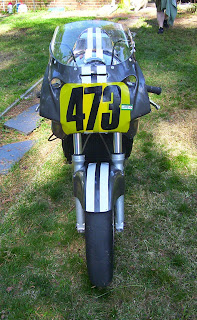 Posted by Kris Larrivee at 7:47 AM