I was excited about my return to the racetrack and impending return to competition. Family and friends were not so enthused. Frankly it was tiring trying to explain it to them.

The one person I wanted to tell was friend and mentor, Phil. He kept me going during the frustrating inaugural racing years. It cannot be overstated how his calm demeanor, patience and sense of humor (not to mention cheap labor rates!) kept me grounded in sanity as I cut my teeth. As a long retired motorcycle racer, he understood the passion and the madness.

I knew from a friend that Phil had not been doing so well. We never spoke on the phone much, although I did make it a point to go see him on my yearly visits back to upstate NY. The mutual friend told me that Phil had been diagnosed with Rapid Onset Dementia, and that there were good days and not so good days. The picture he painted had my stomach in knots. I needed to make a pilgrimage north.

I won't discuss what I witnessed, but I can say, at least for me, death would be the more preferable option. I could have handled death, a chance to grieve, to mourn and then finally, remember fondly. But a decaying half-life that would allow none of them? The callous, savage irony of it made me seethe with anger, want to punch god in the mouth and scream until my lungs bled.

There is no salve for the horror of watching a brilliant mind malfunctioning. It is a filthy and perverse joke of nature for such a thing to happen. I was sick over it.

It was a long drive down a helpless road home. 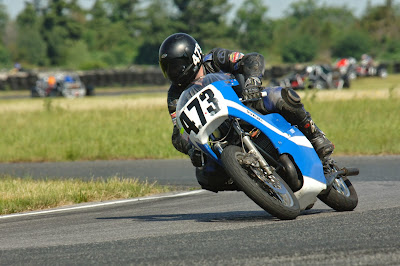 The bike Phil helped build
Posted by Kris Larrivee at 9:27 AM