Remember, remember, Summit Point 'tis cold in November!
Running low on reason, my bankroll about shot
My return to racing, at least by me, shall never be forgot. 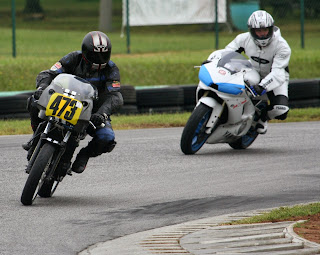 I didn't blow up Parliament and I certainly didn't set any scorching lap records that frigid weekend November, 2013, but I was there. Turnout was light, probably due to the temperatures, which struggled to hit the mid-50s during the day and dipped down near freezing overnight. The weather did not bother me, my only concern was that the straight water we run in the cooling system as per the rules might freeze. When I checked the digital gauge first thing on Saturday morning it read 34 F. Close.

Morning practice is cold. Two guys crash on the first lap of the first session. I know better and skip it. I already know which way the track goes. Second session is warmer. I find myself all alone out there, which can make things tough, as you don't have a frame of reference. I am tentative and making rookie mistakes trying to find my rhythm. At the end of practice I am eight seconds off the pace of the leaders in my class. Eight seconds. A fucking eternity.

I know I will get two to three seconds faster during the race, probably pick up another second or so as the pavement warms up. The other guys will get faster as well, which means I have a lot of work to do. I try not to feel too discouraged and remind myself that this is my first race back, finishing and not getting lapped will be an accomplishment. Somehow that's just not good enough. And somehow, it seems, I have brought a knife to a gunfight. Again.

Stock motor and street tires on an outclassed machine is a recipe for underdog, eternal longshot status. I've just hit the upward slope of the mountain again and it already feels familiar. I grit my teeth and decide to give it everything I've got.

I get a great start in my first race and lead going into Turn 1. For a brief moment I wonder if I have a chance, then the fast guys come wailing by me and the question is answered like a slap in the mouth. I watch three of them disappear into the distance like rocketships piloted by madmen. I chase, catching nothing but exhaust fumes and humility.

I finish the race fifth or sixth overall, but because of my Novice status I am actually second place, but it's a really distant second. Oh well, nobody needs to know that, second it is!!

The next race is a repeat of the first, without the good start, and the results are the same. I can live with it, at least for now, knowing what work needs to be done for next season.

Wandering around the paddock that evening, taking in the sights, sounds and smells that I had long been absent from, I re-discovered something I did not know was lost.