The Seven Stages Of Hare Scrambles

People often ask me what it's like to race hare scrambles.  I always tell them it exactly mirrors the Seven stages of Grief:

1. Shock:  Damn, how did all these other guys get past me?  How are they so fucking fast?

2. Denial:  I am not this slow.  Those fuckers are cheating.  They cut the course.  They have better tires.  Better suspension.  Better lives.

4. Bargaining:  If I can just pass this guy, I will take it easy for the rest of the race.  I will mow the lawn next weekend, I promise.  One more rear tire to get me through the season.

5. Guilt:  I wish I had loctited those sprocket nuts.  Why did I skip those days at the gym?  I'm sorry I ate the whole pizza.  I'm sorry I just ran you and your shiny KTM over.  I'm sorry I spent my savings on another dirt bike.

6. Depression: So tired and sweaty, just want to die.  This is so hard, whole body hurts.  Too fucking old for this bullshit.  I'm going to crash again, I just know it.  I want my mommy.

7. Acceptance:  I am slow.  I will always be slow.  Dirt bikes hurt.  They will always hurt.  I will do this again as soon as possible.  I will never learn.

Posted by Kris Larrivee at 6:25 AM No comments:

"And now I see, with eye serene, the very pulse of the machine." -Wordsworth

Life has its ups and downs.  Sometimes the downs seem to stretch out long between the ups.  That's where riding comes in, at least for me.  Since the age of 15, whatever disappointments existence dishes out, they have all been easier pills to swallow with the aid of motorcycles.

Riding provides the opportunity to get outside of your own head.  To exist in a single moment which leads to the next and then the next, away, at least temporarily, from the moments that led you there in the first place.  It requires interaction with the present, a funneling of focus into here and now, not there and then or where and maybes.  Piloting a motorcycle quickly and with any skill, such as in racing, requires honing to a pinpoint accuracy.  These two-wheeled machines, by design, cannot carry much baggage.

There are those who would call this escapism.  But the mind is a funny thing.  When engaging in those activities that require our undivided attention, the ones that fulfill us, that have meaning, we can find a calm place, the "eye serene", leaving our subconscious to deal with the storm raging about.  And it will.  I return from a ride not to find unpleasant things have disappeared, but maybe shrunken to a less cumbersome size and things so tightly knotted prior, have begun to work themselves out.

So when the hard days come, as they are wont to do, you know where to find me. 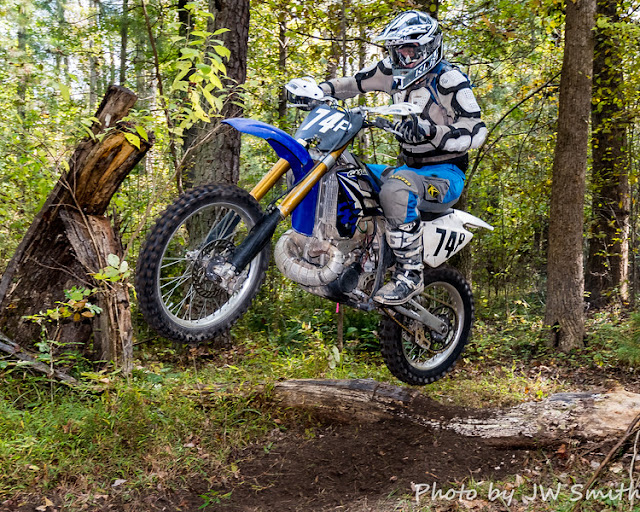 Posted by Kris Larrivee at 5:37 AM No comments:


Race day arrives and it's already been a long weekend, with rain and driving and wind and cold, not to mention getting lost in the woods.  My plan is to relax, and survive.  I expect it to be muddy and slick after Friday/Saturday's deluge, and with four laps plus one mile scheduled to run over the nearly 10 mile course, exhausting.

The "live" engine start means no worrying about tiring yourself kicking a machine that all of a sudden refuses to start while competitors roost into the distance.  I have no intention of leading the race during the first lap or two.

That plan gets chucked out the window when the green flag flies.  No one wants to lead the race.  Everyone is pussyfooting around.  I finally thought, 'fuck it', shifted to third and took the lead by the second turn in the infield.  The mulch section offers surprisingly good traction, as does the dirt track oval.  A four foot drop off followed by a slippery hairpin turn has us heading towards the woods.  Wide open.  Fast.  The bike is kicking and bucking like a rodeo bull that just had his balls prodded.

The grass track section is more of a slick mud track now, some of the jumps are intimidating, either you go full on balls out to make the landing ramps on the other side, or come up short, knocking your teeth out landing flat.  I mostly end up doing the latter, holding my questionably welded footpeg bracket on through sheer force of will.  Briefly looking back, I realize that I have pulled quite a gap on the field.  My heart starts pumping.  Delusions of grandeur.  This is it.  This is my race.  I'm a hero...

Five seconds later I catch a rut and fall down on a slimy switchback turn.  The twenty or so seconds I spend fucking around getting the bike upright and running means the entire field passes me.  Last place.  Now I'm a zero.

Head down and back to work.  The one advantage I possess is knowledge of the entire course, having unintentionally walked it yesterday.  I know how fast it is, more like a GNCC than a tight woods Virginia hare scramble.  I cut through the riders in my class again, and finish the first lap in second place, elated, fully intending to win.

The second full lap ends and I come across in first.  It's a hard position to be in with half the race remaining.  I need to conserve energy to finish, but unwilling to give up the lead to do so.  I focus on running a pace where I will not crash.  Fast where you can go fast, slow where you have to go slow.  Sit down and relax when possible.  The plan works reasonably well until the third lap where slight  brain fade at a creek crossing has me down on the ground.  Nothing major, but just enough for Juan Jaramillo and another rider to get by.  Now third.  Things are getting hairier.  There are traffic jams of slower riders stuck in muddy ruts ahead of us.  I catch first and second place.  I could make an aggressive move here and jam into Juan, but opt for the more sportsmanlike approach and wait for a break in the gaggle of machines.  Juan sees a hole and goes.  So do I, pulling my muddy goggles down so as to see.  I pass him and several stuck riders.  Shortly after he passes me again.  I do not want a battle.  I want first place, can see him.  I pass and gap Juan, then pass the first place rider, going as fast as I dare.  No challenges.  Chance a look back.  No one there.  Time gained.  I get that queasy feeling in the pit of my stomach.  There are likely less than ten minutes left on the last lap.  The race is mine to lose.  I can taste the win.  Finally.

Five minutes later is a hill climb of mud and rocks laid bare by the hundred or so machines that have traversed it several times.  A young rider on a 125cc two-stroke Kawasaki is stuck mid-hill, spinning his wheel desperately on a rock face, going nowhere.  A course marshal is on his left side, tugging at the bike.  The only line is on the right.  No problem, I have momentum on my side.

Suddenly another marshal steps out of the trees and into my line.  I'm screaming for him to move.  He doesn't hear above the racket.  I try to aim between him and the stuck rider, somehow managing to get his rear fender hopelessly jammed  between my front fender, forks and wheel.  I'm livid, screaming for the marshal to get his bike off me, yelling that I can make the hill, whereas the other rider obviously will not.  Unaided, I get my bike unstuck and go sliding around for the left line, while sliding backwards.  I am suddenly t-boned by another bike.  Juan.  Dammit.  He's caught me.  And now rammed me.  I'm willing to forgive the first hit.  But when he backs up and takes another run into me, I'm ready to fight. Son of a bitch is trying to knock me down.  At this point I will tackle him in the middle of this goddamn hill and roll to the bottom just so he doesn't get by me.  My previous gentlemanly conduct in regards to him has come back to bite me on the ass.  After he hits me the second time, I look him in the eyes and shout over the two-stroke din, "You let me get up this fucking hill."  His eyes widen and he knows I mean business.  I am in no mood to be fucked with.  He has already won the damn championship, so he stands nothing to gain with these shenanigans.  He concedes and I ascend the hill.  With all of our lovemaking, the eventual race winner, Jeff Hackett, has passed us both.  I chase, but do not have enough time to catch him.  Juan never makes another attempt.  He settles for third and I settle for the bitter taste of second place, three seconds ahead of him.

It was a decent run, but this late in the season, even in the 40+C Class, decent just won't cut it anymore.


Posted by Kris Larrivee at 5:08 AM No comments: