I eventually learned how to ride that DT250, well, I learned how to get farther between crashes anyways. I'd like to say it was the equipment limiting the rider, but if you put me on a lighter, faster machine I would have just high-sided myself farther into the air.

Let's face it, I sucked, and nobody bothered to tell me. If I had any faith in my friends at the time I would say they did this not wanting to hurt my feelings, but I think they enjoyed the spectacular wreck-fest I provided during our jaunts, hence their lack of desire for me to improve. During the winter I could be found cartwheeling an old snowmobile on the trail, in the summer my dirt-bike was inevitably tumbling down some hill as I tried like hell to get out if it's way.

Despite all of this, I refused to slow down. Things got so bad, after a slightly hairy crash that involved me being ejected from a snowmobile over a guardrail and into a highway, a neighbor actually had a discussion with my parents that ended with the statement, "If he doesn't slow down, he won't live to see 18".

I wanted to go fast, plain and simple. Not just a little fast, but really fucking fast. I did not drink, smoke or use drugs (still don't), but going fast just did it for me. Still does, and I am a lot older than 18 now. 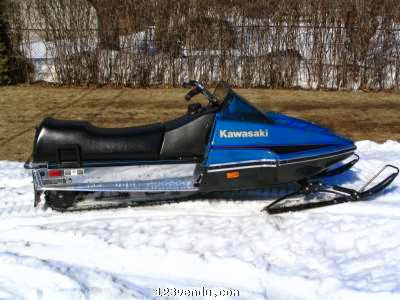 1978 Kawasaki Invader that helped catapult me into NYS Route 3

Posted by Kris Larrivee at 8:32 AM