As many of the vintage racers roll out of Mid-Ohio, so roll in the modern guys for the WERA event on Monday and Tuesday. It's a double header, meaning I will race the D-Superbike and Clubman classes both days. The other EX racer is also staying, but even though we will be on the racetrack at the same time, due to the fact that he has expert status and I am still a lowly novice we aren't technically racing one another. I don't think either of us gives a shit about rider status. The gauntlet has been thrown down. It might be getting a little bit personal. It's amazing, we have hardly spoken a word to one another up to this point, but we are very obviously getting inside each other's heads.

The thing is, once you've beaten a guy, you know it can be done. They stop being some mystical demi-god with supernatural riding abilities and become just another guy on a bike. And since I am a mystical, supernatural, demi-god rider in the making, I have the edge. Despite my faith in that high school logic, I know it will not be easy. This rider is going to do everything to "keep me honest" as they say. We are so evenly matched that the only way to triumph is to suss out each other's weaknesses and capitalize on any mistake, no matter how small. This is difficult enough to do sitting at the chess table, but at 100+ MPH, with other 20 riders and 15 turns to navigate properly? Downright fucking daunting. I grin maniacally just thinking about it. 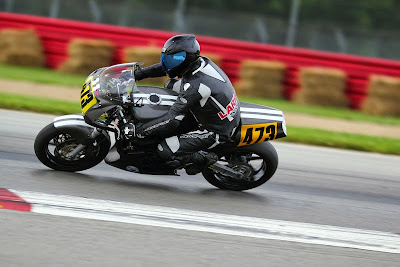 Posted by Kris Larrivee at 6:23 AM