Three years passed before I felt the call of two wheels again. One of the local drunks (there are lots of them in northern New York) was selling a mid 1970s Yamaha DT250 enduro for the not so princely sum of $250. The bike was in reasonably good shape considering it was almost twenty years old at the time, still sporting the original hard as a rock trials tires. There was no title, but that didn't matter as I didn't have a license and figured I would ride it off road anyways. We had plenty of trails and fields and in those days no one really cared if you rode across their land, our small town had no police force and state police response time for a dirtbike on public roads was approximately one hour, so no worries there either.

My parents were not thrilled at the idea and refused to help me financially with the purchase. I half expected them to tell me there was no way I was buying a motorcycle and had developed a contingency plan to hide the bike at a friend's. Their acquiescence rendered that machination moot.

I gathered as many soda cans as I could for deposit, sold a few old skateboard decks and gasp....actually worked for the money to buy the orange and white two stroke. Two weeks later when I finally had the money together I managed to catch the owner in a rare moment of sobriety. He lived in an old school bus behind his cousin's house and told me to meet him there to collect the bike. I had the bus driver drop me off after school (these were the days before you needed a parent's note signed in triplicate by all legal guardians).

"You know how to ride this thing boy?"

"Ever ridden anything with a clutch?"

"See, what you do is let the clutch lever out real slow and give it some gas...."

Thirty-two stalled attempts and two near loop-outs later I managed to get that pig rolling out of the backyard onto the trail. It was a three mile ride through the woods and I came prepared with no helmet or gloves, dressed in shorts and a t-shirt. This was a decade before the cell phone.

I got the idea of upshifting to go faster fairly quickly, however downshifting was another matter entirely. I stalled in third gear going up a hill on the way and promptly fell over. I smelled something burning and wondered what it could be. Just the flesh on my leg as the hot exhaust pipe seared into the flesh. Quickly jumping up I soon learned every way not to pick up a fallen motorcycle on a mossy slope. The gas tank had three new dents in it by the time I got it upright and stable. It then took me five attempts to realize that to re-start in gear you needed to hold the clutch lever in.

Fifteen minutes later I could still not ascend the hill as the bike kept stalling. Sweating, cursing and regretting my purchase of this piece of shit that couldn't make it up a small hill I began to lament spending my money on motorcycling (not for the last time).

An hour later I had given up and started the long hike home when my younger brother rolled up on his ATV (by this time he understood shifting and the operation of all manner of off road type vehicles) and asked what my problem was.

"Goddamn piece of shit dirt bike doesn't have enough power to go up a hill. I think the motor is blown or something."

He got off his Kawasaki four-wheeler and came over and looked at the bike. He started it first kick, let the clutch out and stalled.

He fiddled around with his left foot for a minute while rocking the bike back and forth slightly. 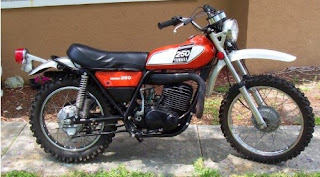 Posted by Kris Larrivee at 5:11 AM