My mind made up, I calm down and get some sleep. In the morning I do some reconnaissance and locate my doppelganger's motorcycle. The running gear is identical to mine, CBR front end and rear wheel, ZX swingarm, Fox Shock and he is running slicks. I can see Keihin CR carbs under the gas tank, just as I am running. The only noticeable difference (other than cosmetic/fairings) is his Kerker exhaust as opposed to my D&D pipe. No excuses.

He is gridded a few spots in front of me. I know that I cannot let him get away. The plan is to do just that, catch him and latch on until I can find a spot to make a pass. Simple plan in description, vastly complex in undertaking.

I get a hell of a start, first into Turn 1, the fast FZR hybrid tries to come around the outside of me. I think for a split second, let him go, then my mind answers: make the son of a bitch earn it. I do. I refuse to give up the line and force him to run a little wider than he planned. It doesn't matter as the turn straightens out and he opens the gates on that FZR, the fucker is just gone. I am astounded at how fast the bloody thing accelerates, staring as man and machine become smaller and smaller heading into Turn 2. So mesmerized by the speed of the FZR am I, that I forget to upshift and goddamnit if Mr. Ball doesn't come sailing by me on the EX.

Swearing and screaming into my helmet at my unending stupidity, I give chase, only to be balked as another FZR and a Honda Hawk come by in 2. We head into Turn 3, the Keyhole, an off camber uphill to downhill righthander that leads onto the back straight. I am straining every muscle in my neck to keep my eyes focused on that EX500. If he gets away here, it's over. I spend two laps trying to make time, pissed that I let him by me. I finally catch him in the complex of turns that lead out onto the front straight. I have no motor on him, so a draft and pass will be the only thing that might work. I suck at Turn 1, so decide not to pass there, instead following and watching him ride.

His style is much different than mine. My lines are wider, more sweeping, while he seems to protect the inside, probably to keep people from passing. Both methods seem equally effective, because we are running identical lap times. Nose to tail we head through the Keyhole again, I get on the gas a little sooner, but the bikes are so equal I cannot make a pass. I draft him the whole way down the back straight, closer to his rear wheel than I have ever been to another bike. If he makes a mistake, blows a motor, whatever, we both go down. He guards the inside as we come to the right hander at the end of the straight. I pull out of the draft and show him a wheel, on the outside, not intending to pass. I don't think he noticed me, or it would have surely tipped my hand and prevented me from using the move again.

I shadow him for the next lap, waiting, so close I can smell his shampoo. We come out of the Keyhole again and come wailing onto the back straight. Inches from his rear tire I wait agonizing moments for the perfect opportunity. I see his head come up, signalling his braking point, pull out of the draft and make an outside pass. We head into the right hander at the end of the straight. (If you look at the picture at the bottom of this page, you can see the rider's head turned in my direction, I think I may have surprised him passing where I did!) This turn immediately flip-flops to a left hander with no passing opportunities, and I have the inside line and I am ahead of him. Now I just have to stay there.

I can hear his motor droning just behind me and I know he is close. I cannot slow down and I cannot fuck up, else he'll have me. I push so hard the front slides a little and I end up out on the rumble strips in a little tank slapper. It happened so quickly I didn't have time to let off the throttle, and just kept on going. I keep him behind me for the final lap and finish in fourth place, exhausted and elated. There is nothing like triumphing over such an evenly matched opponent. Obviously an outright win would have been the most preferable outcome, but somedays you take the best you can get. 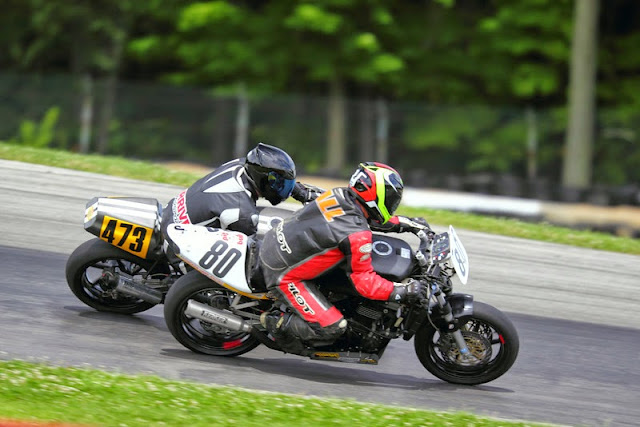