You Won't Get Hooked the First Time, But It Might Kill You.....

I didn't, on either count. My first motorized two-wheel excursion was forgettable to say the least. It was that awkward age of 12 when discovery is a part of daily life: girls, hair in places where it had not previously been, the need for deodorant etc.. There was an older guy, Steve, from my neighborhood, I wouldn't really call him a friend, who was constantly getting me into things I would have done better to avoid (the year prior he had given me my first and last beer and managed to get me chased by a very angry bull). Steve's friend had a mini-bike, a Honda 50 to be exact, 3 speed clutchless affair if I remember correctly.

My parents strictly forbade me from riding or owning anything with a motor and for the most part I was happy pedaling my ass all over the neighborhood on my Huffy. But Steve wouldn't let up. He kept telling me I had to come over to his buddy's house and ride this thing. When he questioned my newly blossoming manhood by calling me a "pussy", I gave in, told my mother some lie about playing baseball and coasted the Huffy down the big hill towards fate.

When I rolled up they were taking turns riding around in circles and figure eights in the backyard. They gestured for me to take a turn and I stated that I just wanted to watch. My manhood again was doubted by the instigators. I was informed riding this thing was "easy", it only had 3 gears, all I had to do was shift up with my left foot.

I knew nothing of gears or shifting, never having ridden a 10 speed, or even one of those super sissy 3 speeds that could get you a beatdown from the BMX gang in my neighborhood. I was a one speed wonder.

After mounting the diminutive Honda (after all it was not even as tall as my bicycle!), I began to wobble around the yard, feet doubling as brakes and outriggers. After a short lap I returned, fully prepared to end my excursion into motorcycledom. Steve had other plans.

The hill was not terribly steep or large, but it was daunting as I was still unsure about how to ride this thing. Steve pressed on. Being somewhat weak-minded and impressionable at this young age, I did what I always did. I gave in. I was instructed to "give it lots of gas" to get up the hill, turn around and come back down, shifting into second, then third on the way down.

Heading for the hill full of trepidation and fear, with Steve yelling "More gas!", my eyes watered, (not from crying). I ascended the hill and felt some elation, managed to turn around at top and began my descent, with Steve screaming "Gas! Shift! Shift!". Somehow I got that ferocious machine into third gear and came barreling down that fucking hill at what seemed to be 100 mph. Steve and the 50's owner jumped out of the way as I zoomed past them. The drug of speed overcame me and I experienced a joy that felt like flying.

This joy lasted about .5 seconds as my mind realized the yard was coming to an end, followed only by a nasty hedge, sidewalk, street and death. I screamed, "How do I stop this thing?"

Unable to find the brakes in time, I stuck my feet out, which slid across the grass as the hedgerow loomed quickly at me. I could almost feel the thousand pricks, cuts and jabs from the sticks, I had a vision of getting poked and losing an eye. I needed to stop this roller coaster gone wrong. I turned the bars as hard as I could to avoid the hedge. The front wheel tucked and I remember taking the handlebar solidly in my ribs, knocking the wind out of me. I still ended up partially in that goddamn hedge, but at least I didn't lose an eye.

I gasped, trying to fill my seemingly collapsed lungs with air. The only thing I could think was: do not let these fucking assholes see you cry. Do not let them see one single tear or you will never hear the end of it. They continued to laugh heartily as I finally resumed normal respiration.

When Steve regained control of himself, he said, "I told you to use the brakes, dummy! Hey are you crying?"

I nodded negatively, mumbled something about having to go home for dinner. I pedaled my way up the big hill home, eyes watering (not crying), wincing in pain with what felt like a broken rib, bleeding from a thousand little cuts, trying to make up a baseball story to explain the injuries and thinking only one thing: 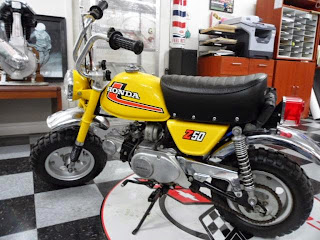