The 2014 race season started to wind down, with only two events left: Pittsburgh International Race Complex (PIRC) in September and the WERA Grand National Finals in October at Barber Motorsports Park in Birmingham AL.

I began to take stock of the season to this point. Aside from minor teething problems my EX500 hybrid had proven reliable and fast enough to run in the top five in the classes it contested. I managed to beat every other EX on the grid with it, not every time, but more often than not. The question remained, as the rider improved, could the bike become a regular winner?

Mid-Ohio provided the answer. As the FZRs and Hawks stormed past, I knew that no amount of riding at the limit or over my head could make up for the difference in speed, power and handling. I also knew that to attempt to extract more from the EX would turn it into a grenade. Something had to change or I would have to settle, knowing that chances of victory were slim on the Kawasaki. I am not one to settle.

Emails were sent, then phone calls made and before I knew it a deposit sent via everybody's least favorite online payment service. The deposit was for an FZR400 racebike in New Orleans, LA. I would pick it up at the WERA GNF in October at Barber Motorsports Park. Yes, I was buying another motorcycle, but this was a RACE bike! 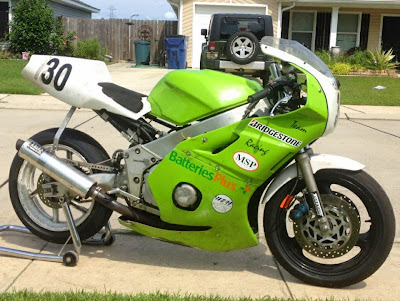