Second Verse, No Different From the First

My next foray into the motorized world came a short time later at some distant relative's farm/family gathering and involved three wheels instead of two. Big Red, at least that's what Honda called it, a 200cc balloon tired ATC. This being the crazy 80's, before frivolous lawsuits become the norm and everything was someone else's fault, some uncle twice removed or something decided it was a good idea to turn two young boys loose on one of these inherently unstable contraptions, sans helmets or safety gear of any sort. At least it had a windshield!

As the day progressed my brother and I grew braver and braver. We had been instructed to keep the machine in 1st gear for fear we might actually pick up some speed, but that didn't prevent us from running that son of a bitch wide open all day long, revving the guts out of that poor little four stroke engine. We took turns alternating as driver and passenger, and it was funny, because despite fighting tooth and nail over everything else in life, we managed to share this vehicle in a most fair and adult manner. Mom would have been proud, if not for what happened next...

It was getting later in the afternoon when my sibling and I were informed that this would be our "last ride". Wanting to savor every second we hopped aboard the machine, with me in the driver's seat. We tore around that farm like maniacs, staying out of sight of the adults for fear they would put the kibosh on our shenanigans. I knew from my previous experience with a Honda, that there was more speed to be had if shifted up. I found second gear somehow and a whole new dimension of velocity opened it's horizon before us.

Faster and faster we went, careening on three wheels, then two and slamming back down to three. I made a beeline for the opening between a farm building and a woodpile with the thumb throttle pressed firmly to the bar, utterly forgetting that the three wheeler was twice as wide in the rear as it was in the front. The resulting collision with the building was a tooth jarring shock, but to make matters worse the rear wheel tried to climb up the building, catching traction, I can hear the wheel spinning and grabbing, tearing paint off just before flipping over onto it's side. My face was smooshed against the now collapsed windshield of the still idling death machine, my brother trapped just behind me.

Adrenaline kicked in and this not particularly strong 12 year old and his 9 year old brother flipped that 500 pound behemoth back onto three wheels, concerned not with injury, but only that no adults had seen the incident. We rode this tricycle on steroids timidly back to the gathering and announced we were ready to go home.

Red flags immediately went up as we attempted to continue our ruse. As the three wheeler was inspected, the white paint from the barn all over the scraped windshield was discovered and we were outed. Once it was ascertained that we had sustained no major trauma (other than bumps, bruises and a sprained neck) the question became, "What the hell happened?"

I answered: "The three wheeler is too wide, it hit the barn." (You could have driven a 747 between the barn and woodpile)

My father replied, "No. You drove it into the barn because you were going too fast and not paying attention. That thing is stuck in second gear, why is it in second gear? You know you bent the goddamn axle on it? (what's an axle, I thought.) You and your brother get in the car."

And thus ended my second attempt to pilot a machine powered by internal combustion. As I held my now swelling face, looking out of the window of the car onto the ATC that tried to kill me, all I could think was: 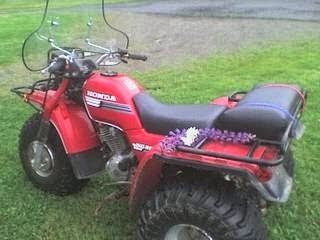 Posted by Kris Larrivee at 5:51 AM