This being part XIII of a Racer's Final(s) Diary

The moment finally arrives.  I am on the V5 grid at the WERA Grand National Finals, with the EX500 race bike barking and shaking between my legs like an epileptic junkyard dog, my stomach churning like a washing machine full of rocks, waiting on the goddamn green flag.  I see the flagman's elbow twitch and I'm off.  My head clears, I know what I need to do and I have six plans to help me do it.

I get the holeshot briefly, but Joe Ball is up on me as well as Kurt.  Kurt attempts an outside move coming down the hill into the left-hander that is turn one.  He gets his front wheel about half-way by my machine when I decide I am not going to let him pass me.  I refuse to let him have the line, I will not back down.  My corner speed pushes the bike to the outside at the exit of turn one, forcing Kurt to back off or make contact with me.  I wager some swapped paint and possibly hurt feelings that he will back off before I do.  He does.  This proves the decisive move of my race.

Joe gets by me and takes the lead somewhere around turn 5 or 6 and I throw Plan #1 out the window.  I am now working Plan #2, which is to let him tow me around the track and away from Kurt.  There is no plan to battle Joe unless Kurt starts hounding me, in which case I will have to get by Joe and use him as a buffer between me and Kurt.  Joe starts pounding out fast laps right away, but I am all over him.  There are one or two spots where I could attempt a pass, one of which is Charlotte's Web (turn 5) where I crashed passing him last season.  I can't risk the championship for a race win, so I shadow instead and we begin our 8 lap dance.  Let him set the pace, and breathe.  And wonder where the hell Kurt might be.

At the start of lap 3 I have to know and risk a glance back.  He hasn't shown a wheel at all, and I wonder if he is stalking us, waiting.  There is no chance of hearing the FZ600 against the raucous din of two barely muffled EX500s at full chat, and I would hate to find myself suddenly pounced upon by a stealthy Yamaha 4-cylinder.  I initially see nothing immediately behind us, so I look a little farther back and just catch a glimpse of a red bike and white leathers, Kurt.  I estimate him to be about four seconds back.  I relax just a bit, knowing Kurt can't make up that kind of time if Joe and I continue our current, fervent pace.  As long as I don't crash.

I start thinking how sweet it would be to completely redeem myself after last year's disaster by beating Joe, winning the race and the championship all in one fell swoop.  I remind myself of the last sentence in Plan #5 "Do not attempt to beat Joe unless it can be done easily.".  Our bikes are so evenly matched that there is no way to outpower him.  We are riding in almost perfect synch, opening the throttles at the same time, braking, shifting, seemingly breathing at the same moment.  If I needed the race win, I could force the issue, start running up the inside and try to get him to make a mistake, but I don't need to.  I prowl and stalk and look for weaknesses, figuring he will make at least one mistake sooner or later, but he doesn't and neither do I.  I follow him so intently the checkered flag waves without me even having noticed the halfway flags or the white flag.  It takes a few seconds for the realization to set in.  I just clinched the WERA V5 national championship.  I did it.  My eyes tear up briefly, but then the serious voice inside my head tells me, "Don't crash on the cool down lap stupid, now you've got the V6 race with the FZR.".  My work is not done. 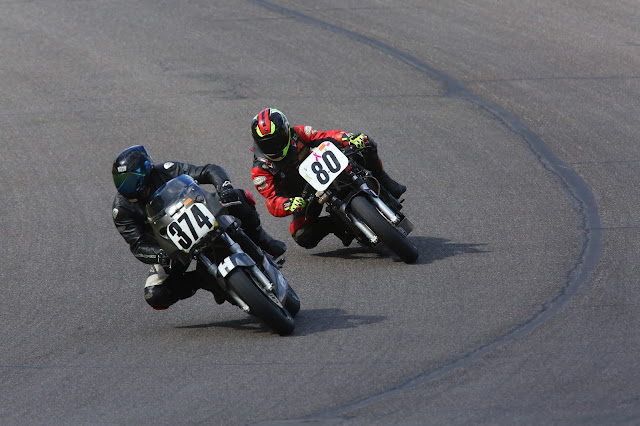 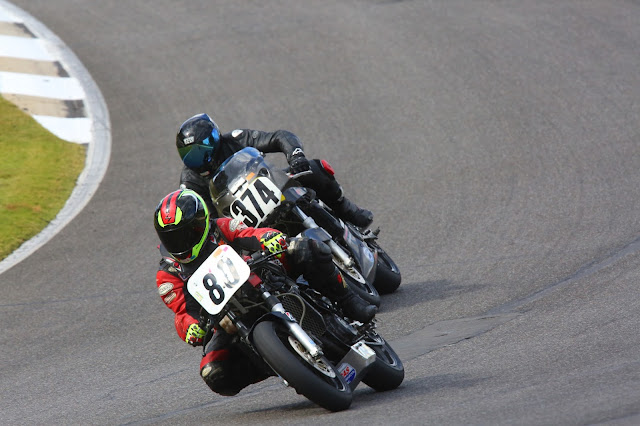 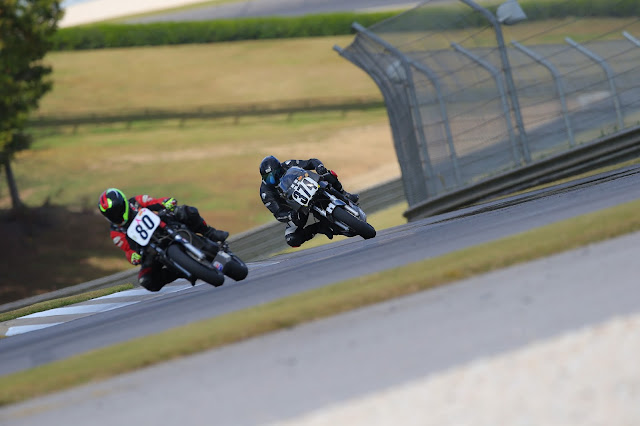 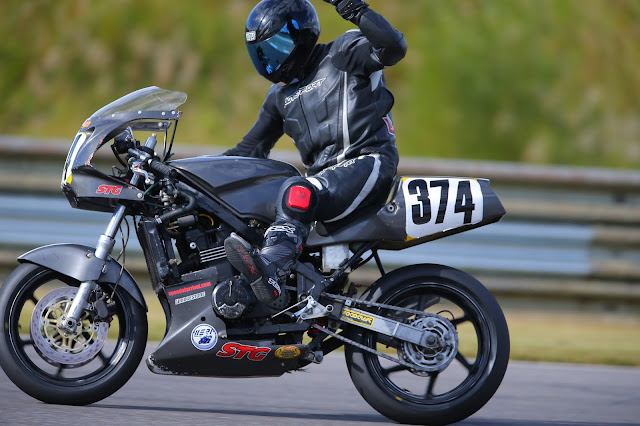 Posted by Kris Larrivee at 5:22 AM