There is no glory in battle worth the blood it costs.

After a quick ride of shame with Fuzzy in the crash truck, the FZR400 and I arrive at our pit, where the machine is hastily unloaded and thrown on a stand off to one side.  There isn't time to be angry as I have to get the Kawasaki EX500 ready for the V5 race which is coming up in about 15 minutes.  I am now starting to remember the joys of racing more than one motorcycle.  With no pit crew or mechanic to keep track of things, it all falls to me, the glutton for punishment apparently.

I throw a spiteful glance in the FZR's direction as I begin the push start drill for the EX.  It lights easily and it's off to the track.  Following the warm-up lap I find myself gridded next to a familiar adversary, Mr. Ball on his nearly identically prepared EX.  This is gonna be a barn-burner of a deal it is.  I am fuming with anger at the possibility of my newly purchased race bike being blown up already.

The flag waves and I get the hole shot, revving the guts out of that little EX, banging clutchless upshifts and generally letting my aggression take over.  I take a tight line into the downhill Turn 1 when all of a sudden some son of a bitch comes swooping across my bow from the starboard side and brilliantly stuffs me from the OUTSIDE.  Heading up the hill into righthander Turn 2 there is nothing I can do but concede the spot and follow, as this rider now has the inside line.  When the red mist clears a little from my eyes, I realize what I feared all along, the rider that made the move on me is Mr. Ball.  And he came for a fight.  Looking back on it now, I realize this is the same move I pulled on him twice at Mid-Ohio.  Old dog, new tricks, eh?

After clearing off from the rest of the field, we dice for the whole race.  I can pass him on the brakes going into Turn 5 (known as Charlotte's Web because of the giant metal spider sculpture there), but he keeps getting by me later on in Turn 1.  This is truly one of the most epic race battles I have had in a career spanning over a decade.  Equal machines and two riders who want it, bad.  I follow him for a lap, breathing and strategizing, and then I make a move.

I pass on the brakes going into Turn 6 (the Mini-Corkscrew mentioned in an earlier blog), knowing his next chance to make a move stick will be Turn 1.  Sure enough he follows me around and then blitzes me in 1.  For the life of me I will never understand why I suck so bad at the really fast corners, lack of testicular girth I suppose.

It is now the last lap and the only place I know for sure I can make a pass stick is in Charlotte's Web.  He will then be forced to follow me around and since the race will be over before we hit Turn 1 again, I believe the win will be mine.  Joe comes in hot and wide into Charlotte's, practically standing up the rear end on the brakes.  I come in just as hot, but on his inside, knowing he can't make the apex if I am there.  I have to get on the gas sooner than Joe to make this thing work.  I can feel it, I am going to win this race.  I am going to win at the motherfucking WERA GNF my first season back!  I am a racing god!!!!!!

No sooner do these thoughts run through my fevered little brain than I hear a small howl from the front tire.  Next lousy thing I know I am sliding across the pavement on my left elbow and asscheek, off the track and into oblivion, feeling Charlotte's soul deep sting, my failure indelibly etched into the record books with those three obscene letters: DNF 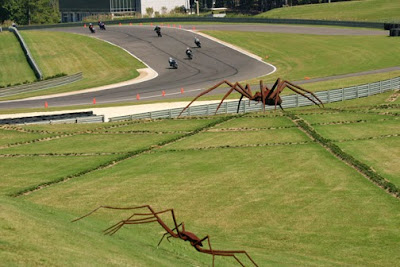