The long day ends and I am thankful for body and bikes being in one piece.  The FZR issue turns out to be nothing more than a faulty switch, and while it is running again, I don't trust it yet.

I have bigger problems, namely my brain.  Yogi Berra said, "Baseball is ninety percent mental and the other half is physical."  The same holds true for racing, but add another half: financial.  And while money is always an issue, it is not my first immediate concern.  There is one race left for me tomorrow before the long trip home and somehow I have to get my mind right before then.  I will be riding the EX, because the FZR does not qualify for the class and truth be told I wouldn't have ridden it anyway, it is loaded in the dark confines of the van, a project for later times.

I won't be racing Joe or Kurt today either, but more than likely a gaggle of testosterone addled teenagers on 250 Ninjas and whatever else ends up in Clubman Novice.  Generally I rely on my horsepower advantage to get a lead on them and don't look back.  The nature of Barber Motorsports Park, with no long straightaways, makes this more difficult.  Normally I love a track like that, but when you are dealing with horny, hungry adolescents trying to make a name for themselves, I would rather be as far out in front of them as possible.  The last thing I want is a battle with a green-horned, starry eyed high-schooler with delusions of grandeur, as I am still, quite literally, nursing my wounds.

On the flip side, this is my last chance to salvage some results from the Grand National Finals.  I want to go home with more than a quarter sized hole in my elbow and a scratched up motorcycle.  Maybe I have some delusions of grandeur as well... 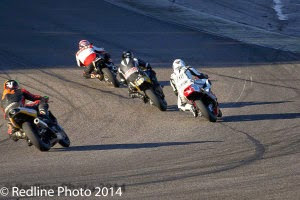