I take delivery of the FZR400 I put down a deposit down on two months ago.  I find it languishing, neglected, strapped down in a well-worn enclosed trailer, waiting.

Buying a bike off the internet is worse than buying a bike in the dark.  Pictures do not tell the story.  To be fair, the owner explained the machine was in desperate need of a cosmetic refurbishment to fix holed and cracked fiberglass bodywork and dented gas tank, etc.., so I was not expecting a looker.

What was not conveyed in the description is the greasy state in which it was delivered to me.  The upper frame rails are covered in gasoline residue varnish, the wheels are covered in chain lube and grease.  There also appears to be oil seepage coming from somewhere under the motor (later determined to be a missing oil pan gasket).  The fuel petcock is half disassembled and JB Welded and the gas lines themselves appear to be almost as old as the bike itself (1989).  The pleated paper fuel filter looks like it came off an MTD riding mower.  There are hundreds of small dings on every aluminum surface, probably from careless "mechanics" swinging wrenches and ratchets haphazardly.  Gobs of silicone are visible squeezing out of many gasket mating areas. 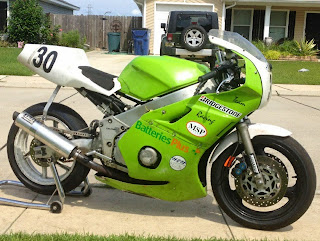 There are no steering stops to keep the forks from flopping around, the only thing doing that is the steering damper and the fact that the left clip-on hits the tachometer.  Wires hang like multicolored spliced and taped spaghetti, leading into the bowels of the sad machine.  Half the fasteners on the bodywork and subframe are SAE, the remainder metric, which makes working on it a true pain in the ass.  The fairing lower has huge holes in it that will never contain oil (which means it probably won't pass tech inspection).  This thing is in truly a dilapidated state of disrepair.

On the positive side, (yes there is some positive), the suspension front and rear is in good shape, having been serviced recently, there are no signs of major damage to the frame, and the motor is kind of a special deal.  The bottom end and crankshaft are FZR400, the remainder, rods, cylinder, pistons and head are YZF600, bringing the final displacement to 489cc, the max for the lightweight classes I plan to contest.  It also has a set of very expensive Keihin FCR carburetors.  So despite the rough exterior, I believe the heart of the beast to be strong indeed.  We shall see.  The plan is to take it out in at least one practice session, but not before it at least gets wiped down with a rag.  Twenty years ago I wouldn't have thought twice about hammering that dirty thing wide open down some race track, but I am experienced enough now to know that my life depends on this thing holding together, and there remains some question as to whether it will.
Posted by Kris Larrivee at 4:35 AM