My first instinct is to remount the bike and finish the race.  Third place is so far behind that I know I can salvage second.  A quick look over the machine reveals a bent shift lever and some minor scuffing, otherwise good to go.  I can feel what I believe to be sweat running down my left elbow/arm into my glove, but I shelve that for thought later.  Just as I am about to hop back on the EX, a corner worker runs up to me and stops me from going back out.

The rules clearly state that if you crash, your race is over.  And this makes perfect sense, who wants a possibly damaged, leaking motorcycle circulating a racetrack with a pilot who may not even know he is injured?  Of course in the heat of battle, with less than one lap to go and only a few corners left to salvage some sort of finish, your perspective and interpretation of this rule may change slightly.

The race ends with me on the sidelines, feeling gut-punched.  It's my first racetrack crash in a long time, and while I completely accept the fact that it is going to happen, the timing couldn't have been shittier.  Crashing out while leading at the Grand National Finals?  What a kick in the nuts.

The cornerworker looks over the bike at the end of the race and determines it is safe to ride back to the pits.  I arrive knowing the bike will have to be fixed and then go through tech inspection all over again.

I have to shove the adrenaline, disappointment, anger, frustration and fear down into some dark corner to allow my mind to think clearly and fix the bike.  I replace the shift lever, straighten the clip-on bar and shove the hand grip back into place.  Everything else is fine.  The left side engine cover is a little scuffed up, but thankfully the original bike builder prepared for this contingency by welding aluminum crash pads on the side of the cover (thank you Ken Baer, wherever you are!), and this prevented it from wearing a hole and spilling oil everywhere.  There is precious little time left before the V5 race to get the EX re-inspected and back on the tire warmers.

I bumpstart the EX and ride through the paddock as quickly as I dare to Tech.  I explain to one official I need a re-tech, she directs me to another official who is right in the middle of a conversation.  After about 30 seconds it becomes painfully obvious that this is a personal conversation that the official intends to complete before even looking at my bike.  The two are laughing and joking, while first call for my race draws ever closer.  I finally can wait no longer.

"Excuse me, sorry, but I need a re-tech, my race is coming up next."

I absolutely fucking hate being called buddy.  I shove this feeling down in that dark corner with the rest of them knowing that getting snarky with the officials will not help anything.  They hold all the cards.  Agonizingly slowly the official wraps up his conversation and then turns to me like he has no idea what I need.  He starts to say something about the belly pan needing to be off, I explain that everything is perfectly visible without removing the pan and that every WERA tech inspection has allowed it.  Thankfully he does not argue and I soon have that precious little sticker on my fairing that will re-grant me access to the race track.

There is no time for the tire warmers as we are already at first call.  As I am pulling my gloves on I notice for the first time there is blood on my hand.  That must be what I thought was sweat dripping from my elbow.  I look and can see the crash has worn a hole through the left elbow of the leathers.  I am bleeding, but not too bad.  I hastily duct tape over the hole and then shove a paper towel up against my elbow to stop the blood.  That smarts.

The shenanigans of the last few hours have left me winded and angry, but still working to maintain focus.  I am trying to be Zen, but Hulk mad. 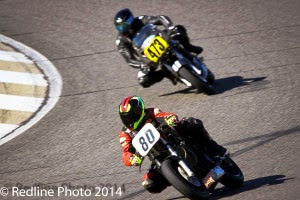 This is as far as Joe got away from me, before the crash.