As a moth to the flame I returned to the cyber enabler of my two-wheeled obsession: Craigslist. Buying a used dirt bike is a crap shoot. Most of them are hideously abused and neglected, crashed with enough regularity to bend just about everything, on top of that they are forced to survive on a steady diet of dust, grit, mud, water and massaging by ham-fisted blockheads with vice grips and Cro-Magnon intentions. Buying a good dirt bike in my price range ($1000 or less) is akin to cryptozoology, there are legends and rumors and occasionally a blurry photo, but these creatures probably don't really exist. Still, it is fun looking.

Exhaustive searching turns up the usual suspects: clapped out shit boxes breathing their last breaths with blown suspensions, loose spokes, swingarms half sawed through by stretched out chains advertised as "completely rebuilt" because Billy and Dylan stuck a brand new "Wiz Co" piston in a scored cylinder without so much as honing it or using new gaskets. Despite having been away from the dirt bike racket for over a decade, I guess some things never change.

Most of these ads don't warrant a second look, with titles written in broken English that truly epitomize the failure of our public education system. This would be almost funny except for the fact that these monkeys are loose all over the internet, and they appear to be breeding at an alarming rate.

Only one ad piques my interest, it is for a 1989 KDX200. From the pictures it appears to be well preserved, with many juicy upgrades such as Excel rims, stainless spokes and an FMF pipe. Two more details convince me to contact the owner: 1. It comes with a "running" parts bike and 2. It has a clear street legal title. The asking price is $1,600, out of my range, but as anyone who has used Craigslist before knows, everything is negotiable. 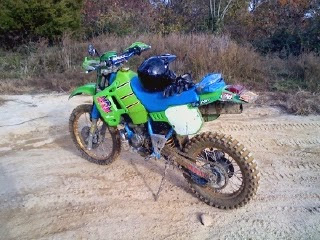 Posted by Kris Larrivee at 6:10 AM