I had already broken my first rule of motorcycle purchasing by arriving after dark to check out a Kawasaki KDX200.  The owner's garage was fairly well lit, so I had a good look at the machine and I knew I wanted it.  Sure it had a few too many gaudy stickers on it, but the spokes were tight, the suspension was not incontinent and the overall condition was clean.

We wheeled the beast out in the dark to start it up, which it did on first kick with a cold engine (yes, I checked), but smoked like a bastard.  It was at this point the owner told me that the motor had been completely re-built (yes, completely, he said) and he pre-mixed a lot of extra oil in it.  Like a real lot, as in fogging the whole neighborhood a lot.

This sounds well and good, more oil the better, right?  What these well meaning owners fail to understand is that in a pre-mix situation, oil displaces fuel.  More oil means what?  Yup, less fuel passing through those tiny little carburetor jets.  And what does less fuel mean?  Lean mixture, the bane of the two-stroke engine.

I am not going to be able to get any idea of how the engine actually runs, what kind of power it makes, because the thing can barely keep from oil fouling the spark plug.  My price limit will have to be set according to the cost for me to rebuild the engine if necessary.  The fact that the deal includes an "almost" running complete parts bike takes some of the sting out of that reality, it also means the asking price of $1,600 is too high.

The owner is insistent that I take the thing for a test ride.  I politely refuse twice, but the third time he asks has me breaking another one of my rules.  Oh yeah, did I mention it was dark and the headlight wasn't working and that I hadn't brought a helmet?

I ride the bike around his yard under the outside light.  This limits me to about 2nd gear and gives me no real impression.  The owner suggests we take my van out onto his road (dirt, no neighbors) with the headlights on so I can wring it out a little more.  Getting slowly hooked on this machine, I agree.

The headlights give me about enough light to hit third gear before having to turn around and come back.  The second time I do this, I catch a rut in the dark and go down, breaking another one of my damn rules (don't crash on a test ride!).  No injury to bike or rider (other than my pride), but I am unable to pick the bike up before the owner sees my plight.  Stupid, stupid.  I now feel more obligated to buy this thing (as if there was any doubt).

The bike's owner is a good sort, blue collar family man up to his eyeballs in drag racing cars and working as a diesel mechanic.  I believe him when he says there is no extra time in his life to ride dirt bikes, and if he feels that 44 is too old to be riding in the dirt who am I (at 41) to argue?

We talk bikes and cars for the next two hours, building a genuine rapport.  This will make it harder for me to lowball him on price, but it won't stop me.  The final number I am stuck on is $1000, which would normally be way too much for a 26 year old dirt bike, but the condition is so good, the model has a reputation for reliability and fun, the extra parts bike, the street title, the fact that I crashed somebody else's shit, that it's getting late and I am cold, would make that price a damn good deal.  The owner has other ideas.

He immediately refuses my $800 offer without so much as a thought.  He knows I want it and is going to make me pay for it.  I hem and haw a few moments before raising the offer to $900, which is rejected without hesitation.  Dammit, this son of a bitch is going to take me for everything I've brought.  I pretend I am ready to walk, but I have a feeling he sees through the ruse.  I have to lay it all on the table, I tell him I've got $1000 and that's as high as I can comfortably go and I am prepared to stick to it.

He counters by saying that his wife's car needs new tires that will cost $1,100.  I am not sure what kind of tires he is getting for her Impala, but that seems really high.  I hold firm at $1000, claiming it's all I have, to no avail.  The poor white guy schtick is not working for me and I can't believe he is ready to let me walk for $100, but he genuinely appears to be.  Must be her tires aren't that bad after all.  I tell him $1,050 is the best I can do and that I will have to walk away sad if he doesn't take it.  I think he knows I mean it, because he agrees.  And I break another rule, spending more than my limit.

Money changes hands, bikes and parts are loaded and I smile, preparing to re-enter a different dimension of the motorcycling universe.  I must be out of my fucking mind. 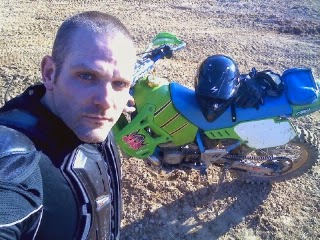