A Place In The Dirt

I began my riding career off-road, as did many. Dirt was the most accessible way to learn the craft of two-wheel riding. As I, ahem, matured, off-road became off limits while fear of lawsuits grew and the barbed wire and NO TRESPASSING signs went up. Sure there were a few marked trails left, but they were gravel roads patrolled by Forest Police, it was like the difference between the Wild West and some cowboy ride at Disney World. Please keep your hands inside the car until it comes to a complete stop, make sure you take all your belongings with you and be sure to buy your picture in the gift shop....

In many ways dirt riding was safer than road riding. There was almost no traffic, no grandmas backing out of driveways to flatten you, the speeds were lower. And while crashes are more frequent, they were almost always less severe off road. When people ask, I always say that you are more likely to fall down in the dirt and suffer minor injury, but you are more likely to be killed, riding on the street.

Riding in the dirt is physical, manhandling a 200lb machine through ruts and roots, over logs and rocks will test your body and brain. The terrain is constantly changing, as is the traction. You have to develop a feel for what the tires are doing every moment, be ready to recover from the inevitable slip and slide. One minute you can't see from the dust, the next you are up to the knees in mud and water, bouncing around, constantly moving to keep the bike upright, dodging trees. It's great fun, if you have the bike and the wherewithal to punish yourself thusly in the name of enjoyment. The biggest requirement, and in this day and age, the most difficult to obtain, is a place to ride. Many a dirt dream has been crushed by encroaching development, neighbors who don't enjoy the sound of 'BRAAP BRAAP' on a Sunday morning, liability, cops, urban sprawl and too much asphalt.

Needless to say I was skeptical when I heard about a riding area that was local to me, within the city limits, free, and purportedly not a bust. Legend said this spot had been ridden for the last two decades without incident. Sound too good to be true? That's exactly what I was thinking. I travelled to the spot with a local and soon discovered a single-track Shangri-La tucked in behind some corporate box stores and rail-road tracks, surrounded on all sides by highways, densely wooded, low-lying and wet and not appealing to developers. 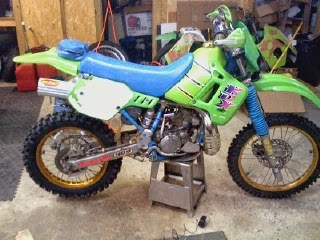 Posted by Kris Larrivee at 5:17 AM