PIRC proves to be a somewhat rough, but fast race track. There is one kink on the back section of the track that can be taken wide open in top gear if your balls are big enough, and brakes good enough to get it slowed down before the slightly uphill right hander that leads onto the front straight.

I am struggling a little bit with the bike, as it has developed a high idle issue when warm, as in idling at 5k rpms. Not good. I check over all the normal stuff, but to no avail. The weather is all over the map, hot and humid one minute, then cold and rainy the next.

My newfound nemesis is in attendance this weekend, and one thing is certain, he knows his way around this track. I get behind him in practice, but lose him after a few corners. It appears Saturday's races will be dry, so I leave the slick tires on.

The rain starts halfway through my first race, I am leading my class. I can see Joe on his EX and I attempt to run him down, but he refuses to be caught. As the rain intensifies my courage diminishes. The slicks have no siping on them to shed the water and become exactly as their name describes: slick. Joe is on slicks as well, but it does not seem to be slowing him down. I lose my nerve and let him go, as well as two other guys with more fire in their bellies than me on this day. I finish third, happy to have stayed upright.

There is a greater incentive this weekend to keep it on two wheels, my brother and parents as well as some good friends have showed up to watch me race. I want to give them a good show and place well, but the pressure is on to do it without cartwheeling down the front straight.

The pavement dries for my second race, and I win my class. Joe is running in Expert, so we technically are not competing against one another, but this does nothing to temper the rivalry that is building. I come up short and for the second time today he beats me. I can see him, but I can't catch him.

I have never been a quick learner at new tracks (or much of anything for that matter) and it is proving no different here in Pennsylvania. Given another 25-30 laps I might figure out my flow, but with the limited track time available on a race weekend, that ain't gonna happen. 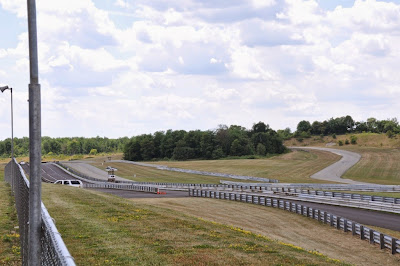 The undulating front straight at PIRC

Posted by Kris Larrivee at 9:58 AM