The van progressed nicely. I stripped everything out of the interior except the driver's and front passenger seat. The bare floor had some minor rust and pin-holes which were addressed. The nice thing about doing this to a passenger van instead of a cargo is that there is already insulation/carpeting and interior trim pieces, so it's just a matter of removing what you do not need.

I used outdoor carpet and a weatherproof insulation on the floor and headliner. The first headliner install failed miserably, with wrinkled carpet and sagging insulation that eventually fell off. I found some very thin wood paneling at the local big box rip-off home improvement warehouse and glued the carpet and insulation to that, which worked out much better.

I cut down one of the bench seats to build a bed with hinged section for storage underneath. At six feet tall I would have just enough room to stretch out fully widthwise across the van, which would leave more room in the back. I am not a carpenter by any means, but managed to use the circular saw without removing any of my digits, although I did cut through the cord. Twice.

The next issue would be fumes from the motorcycle and fuel cans. I needed a partition and a roof vent with a fan. I got a good deal on the vent at a local trailer supply store. There is an old adage : "Measure twice, cut once.". As I sat on the perfectly good, hole-free roof of my new van, ready to drill the pilot holes for the jig-saw, I decided I would measure again. Twice.

An old wheel chock I inherited ten years ago from a crazy drunken hermit who lived in his garage would help keep the bike in situ. I found a fuel resistant garage mat to put down in the back. Windows were tinted by a local professional who had very good reviews. I sprayed black truck bed liner on the rocker panels to break up the massive amount of white paint on the exterior and also added a bit of paint to the center of the wheel covers, because I was not going to spend $800 on cool wheels, that's two sets of race tires! I stopped often during this process to admire my handiwork. Much more than twice. 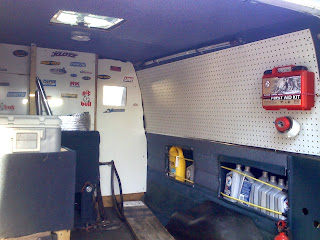 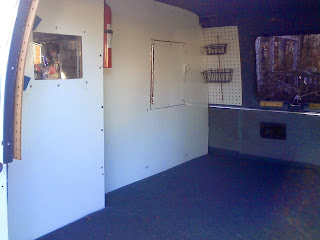 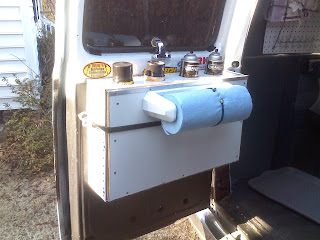 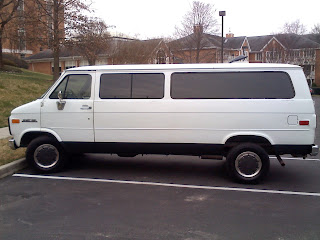 Posted by Kris Larrivee at 8:20 AM