Race season finally began in May, cold and damp, at Summit Point in West Virginia. There was no warm welcome for me as I set up, apparently my choice of parking spot was not sitting well with a hot-headed racer who was mouthing off just out of earshot. I made up my mind that I had come too far, worked too hard and spent too much money to be treated poorly by any of my peers. When confronted he calmed down and then spent the rest of the weekend playing nice, so maybe he was just having a bad day. Still, it's not exactly how you want to begin your race weekend, dealing with pissy bitches.

Setting up can be an arduous task, unloading bike and equipment, but generally the excitement of being at the track outweighs the work. After that a dinner of veggie burgers cooked on the Coleman propane stove. Hey, nobody said this was the Ritz. A small electric heater kept the van toasty warm, while the limo tinted windows provided plenty of privacy. I popped The Hobbit into my laptop and settled in for an evening of Peter Jackson's somewhat overdone rendition of JRR Tolkien's classic. Not a bad way to spend a pre-race evening.

Practice went fine in the morning, getting the hang of using tire warmers and feeling fairly confident about the upcoming races. I was entered in two for the day, first class is V6 lightweight and then V5 two races later, it was going to be hectic. The skies darkened ominous as clouds massed, turning noticeably cooler with the wind picking up. Our race was supposed to be second after lunch, but got bumped to the first race, which increases anxiety slightly. I am counting on a dry race, as I have slick tires and the last thing I feel like doing is trying to change them out for rain tires. I have rains mounted on spare wheels, but this ain't no Nascar quick change type set-up and I won't be able to do it at the last minute.

Going over the track in my mind and remembering where I left it last year, which was about six seconds off the leader's pace per lap. That is a lifetime in the racing world, almost slow enough to be a joke. I asked my brother the stock-car racer if he thinks the modifications made over the winter will offset this deficit. His answer, "That's a lot of time." Tell me about it. For mere mortals it's the bitter-sweet pill that is racing, as good as you get, there is almost always someone faster. Somebody with more money, more track time, more experience, better machinery, just a plain better rider. The excuses are myriad, but at the end of the day, 99 times out of 100, the only person you can blame is yourself. In a world where they want to hand out hugs and participation ribbons to every loser, the brutal honesty of it is refreshing. Like a slap in the face followed by ice water dumped in your shorts. Lots of us skate through life on the greasy mayonnaise of mediocrity, racing demands better. 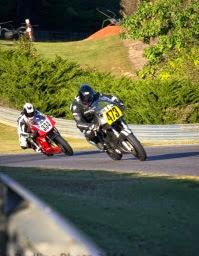 Posted by Kris Larrivee at 9:17 AM