The issue of where I would sleep on race weekends remained. Hotels were prohibitively expensive and meant even more time driving back and forth from the racetrack. My light duty pick-up truck was barely adequate to haul the gear required for a single track day, let alone multiple days spent at tracks far from home. A trailer meant having a vehicle capable of towing, as well as an area to safely store it. I had neither. Surely there had to be a solution? Some vehicle capable of not only carrying motorcycles and gear, but suitable living quarters as well? Something that could be driven not only long distances but also to get groceries? I found my answer, as so many times before, on Craigslist: 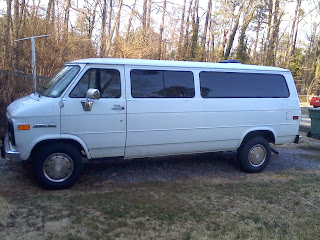 A defunct daycare was selling this gem with only 80k original miles on the clock. It was not pretty or clean, with a funky musty smell and sagging headliner, but the motor, transmission and body were all in good condition. I purchased it for $1,500. The plan was to convert it from munchkin mobile to motorcycle mover with sleeping accommodations and gear storage.

While not a big fan of projects, I always seem to find myself in the midst of one and now with the addition of this creepy van I would be wrapped up in two. There are days when I wonder what it might be like to just pay someone else to do this stuff for me, the building, maintenance, painting, modification, nothing for me to do but enjoy the finished product. No more busted knuckles, swollen hands and late nights on the garage floor swearing and throwing things. I am not wealthy enough to entertain such notions though and I guess somehow it offends a part of me, allowing others to do things I am perfectly capable of learning, at least in a half-ass almost acceptable sort of manner.