I was halfway to spontaneous combustion on a sticky, sweaty July weekend, the kind that has volunteers delivering water to old people and invalids. It was the beginning of a hellish trip to Ohio in a recently purchased dying ex-Snap On cube van with no air-conditioning. Somewhere outside of Rochester, NY, one of the dual rear wheels decided it would attempt to part company with the vehicle, taking most of the wheel studs with it. A slight shimmy turned into a violent shake before my over-boiled brain realized something was wrong. Pulling over on the side of the NYS Thruway to diagnose this issue was probably the most dangerous thing I would do that weekend.

There was one lug nut remaining to hold the wheel on, and just three of eight wheel studs left. I could not afford to have the behemoth towed, so I decided that three wheel studs would have to work as far as the nearest garage. I robbed 2 lug nuts from the other wheels, tightened the whole blasted lot down. With salty sweat stinging my eyes, I think I might have said a short prayer, or I may have been cursing god.

The first truck repair place I found refused to work on the van. After driving another 10 miles I found a shop in Geneva, NY that said they would do the repair, but the parts wouldn't be in until morning. When I asked if the van was safe to drive to the nearest campground the shop owner and his mechanic gave me strange looks. Fuck it, I thought, it wouldn't be the first time a wheel has fallen off one of my vehicles.....

I spent the night in that aluminum oven, body dripping, wondering if I would die. A call to Phil for moral support did nothing to ease the dehydration that was starting in my soul. The day dawned expensive to the tune of $300 and I pondered if I could afford the rest of the trip. I suppose turning back was an option, but my heat-induced daze had me scrambling forward over the next sand dune for the oasis I could almost touch, while the scorpions nipped at my balls and the buzzards hovered....

The heat was more oppressive and the humidity made breathing feel like drowning, but I was thankful that all the wheels seemed happy to remain in place. I began to feel I would make it to Mid-Ohio after all. That is until I stopped at the toll booth in Buffalo and the goddamn van stalled just as I went to take off again. It is a very surreal fucking feeling rolling along in a vehicle as quiet as a tomb with traffic whooshing by on both sides, idiots honking their horns and yelling at you to get out of the way, but for fear of being hit you cannot get over to the shoulder. Hazard lights flashing, I cranked and cranked on that son of a bitching starter to no avail. I screamed, pleaded, kicked the steering column, I may have even sobbed. I wanted to lay my head on the steering wheel and wait for a tractor trailer to plow me into oblivion before I suffocated in my own perspiration. I offered up another invocation to any spirits in the vicinity, hit the starter one more time and the Chevy small block stumbled awake from it's feverish slumber. My foot went to the mat and the disaster went rolling on down the road again.

Things went fine until I had to come to a stop, whereupon the van would stall again. I popped the hood to see if I could figure out what the hell was going on and I found the fuel filter empty, which was odd, because I had plenty of gas. I decided the quickest way to get that pile of shit out of the traffic lane it was blocking was to back-fill the filter with gas from the can in the back of the van. Keep in mind that I am trying to do this amidst honking horns and motherfuckers screaming at me. It is truly amazing how other people get so offended at someone for breaking down, I mean, shouldn't I be the one offended? I believe some of them actually wanted to do me physical harm. John Lee Hooker sang, "The road is so rough.", he wasn't kidding.

Long story a little shorter, I finally made it to Vintage Motorcycle Days at the Mid-Ohio Sportscar Course in Lexington, Ohio, van stalling the whole damn way, me covered in gas from re-filling the fuel filter. I did not have enough functioning brain cells to figure out the problem or enough funds to pay someone else to. I parked in the paddock after paying the exorbitant gate fees and shut the van off knowing that for at least two days I wouldn't have to worry about re-starting it. 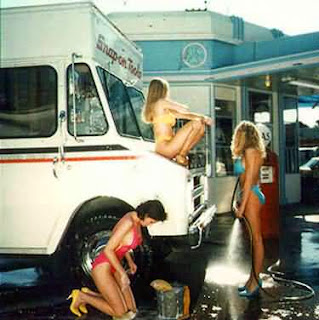 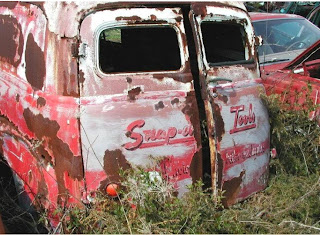 Posted by Kris Larrivee at 8:21 AM