The learning curve was very steep. Two things were evident from the start: 1. I was no mechanic. 2. I was no gifted rider. In retrospect the smartest thing would have been to purchase a more modern machine, such as a Kawasaki EX500, do some track days to build up confidence and skill, then make my way slowly to the deep end (actually the smartest thing to do would have been to go back to school and make something of myself, but I digress). There is the right way, the wrong way and then the Larrivee Way, which can generally be summed up as banging your head against a wall repeatedly until bloody, stopping to put a band-aid on, then re-commence banging, expecting a different outcome.

I fell down, I got back up. I destroyed helmets, I bought new ones. I holed pistons, I bought new ones. At one point I had the largest collection of cracked left hand T500 cylinder heads in the world, rivaled only by my pile of broken crankshafts. I spent the money I had on racing and repairs. I started selling the left over street parts on Ebay to offset some of this cost.

I blamed the bike for being unreliable and slow, whined about other riders having better equipment. The focus on the negative became a self-fulfilling prophecy of failure. I had a flair for the dramatic, throwing wrenches, helmets, kicking my broken motorcycle and generally acting like an entitled little bitch. I deserved to be winning races, why couldn't the rest of the universe see that? 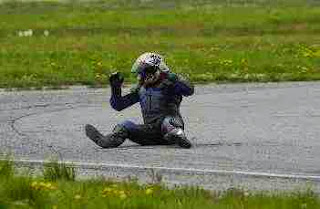 A lot of energy got wasted in this fashion, looking back I wince at some of my actions during this time. At least I proved to be a source of endless entertainment for my group of racer friends. They found my struggles, my self induced comedy of errors, hilarious. I wanted to be a serious competitor, I ended up as something of a joke. Egged on by the attention I continued in this manner, flying in the face of authority, rationality and physics. Most of the time it did not end well. Something was going to have to give....

A breakthrough in my riding happened during a race at Shannonville. I found myself behind a somewhat heavy racer on a very questionable Yamaha RD 400. I say questionable because we had been looking at it in the pits and the thing was atrocious, seeping oil, old tires, bargain bin suspension. In practice this rider and I drag raced down the back straight, my Suzuki winning handily. Despite this, I was unable to make a pass. I could out-accelerate him, I was a lighter rider by at least 20 pounds, had better brakes and suspension but through some magic beyond my limited comprehension, he was faster. My brain focused on solving this conundrum while my body concentrated on the actions required to keep the RD in my sights. Whatever this rider was doing worked and I would be damned if he was going to get away with it. I followed him into and out of every corner, adopted his brake markers and turn in points, copied his lines, paid attention to every nuance of his riding. His corner entry speed was remarkably faster than mine, which made his mid-corner speed and the all important exit speed greater. He got on the gas sooner and more fully, braked later, but more subtly he was stringing the corners together one after another to put together a lap. I was always thinking about the previous corner and how I blew it when the next one came rushing up. This rider was thinking at least 3 or more corners ahead, his mind and body knew what to do well in advance and they did it, all the while looking farther ahead. I blatantly stole every trick he had and looked for more. I learned more about riding during those 10 minutes than the 10 races, hell 10 years prior. His engine gave up the ghost on the last lap and I finally passed him, but there is no question in my mind that if not for his mechanical failure, he would have beat me.

A small mental shift occurred that day. I had been railing against a host of things over which I had no sway and bemoaning my fate instead of concentrating on all the things over which I could exert some control. Details mattered, preparation mattered, thinking mattered, not rushing in leading with your balls. Les évolue de Cro-Magnon.