On the Other Side of Fear

The start of a race is the most dangerous time. With anywhere from 10 to 40 bikes lined up on the grid, engines and hearts revving to the moon there is so much that can go wrong. Stalling the engine as the green flag drops means you could get absolutely lambasted from behind as another rider moves through traffic. It is not a pretty sight watching as bodywork and body parts explode, sailing through the air. We have all seen that helpless rider waving his arms frantically like a rabid chicken trying not to get hit. I know many racers who have nightmares about it.

It seems like such a simple thing, when the green flag drops, go. The weeks and months of preparation and training come down to those frenetic moments watching the flagman intently, restrained and straining, always thinking, if I can just get through Turn 1 it will all be OK. Most of the time it is, sometimes it isn't (see paragraph above). It always makes me nauseous.

But never so nauseous that I wouldn't line up and do it again right now. The start of a race is always a new beginning, an opportunity to learn something, to better oneself, finally get it right. Racing may be a cruel mistress, but she never stops giving you second chances.

Its scary as hell, but on the other side of fear is what lies ahead, good or bad, and the only way to know is to drop the clutch and hammer that son of a bitch like there is no tomorrow, because there might not be. 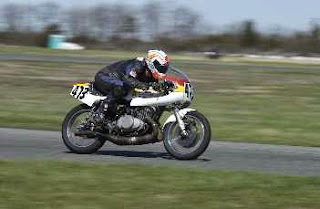