Eventually some of the other vintage racers took pity on this clueless soul. What a sight I must have been, sitting on my cooler eating cheese sandwiches and baking in the sun, when I wasn't running around burning my hands on hot spark plugs trying to get a reading or dumping pre-mix everywhere while changing main jets. A racer approached and told me I needed to get into the shade. He pointed to his pit area and said that I could shelter under his canopy.

This simple gesture opened up the world of motorcycle racing for me and thus I was pulled into the fold. It is not an exaggeration to say that the "vintage guys" were some of the best people you could hope to meet. Languishing under borrowed shade, drinking a water that someone handed to me and the only price of admission was to tell these new found friends who I was and how I came to be there.

This was a working class lot of do-it-yourselfers, building and wrenching on race bikes and fixing their own vehicles. They drank beer, told uproarious stories, put on no airs and made no excuses for who they were. They didn't have the latest, greatest plastic wrapped sportbikes, hell their cars were all 15 years or older, but it didn't matter. They were happy and thankful to be able to do such an amazing thing. The spirit was truly infectious. The most memorable characters were Wayne and Brian. I never met two people who got more joy from motorcycle racing. It was obvious from the ear to ear grins and excited arm movements as the two talked about it.

Wayne drove a beer truck that the company allowed him to take to the racetrack with free samples. This made him quite popular as you can imagine. Even the modern bike hotshoes that would snub their noses at vintage riders were friendly to Wayne. He had long grey hair and a mustache, in the best of 1970's metal style. When he thought about something his eyes were half closed and he looked asleep or stoned, but he had a quick mind and even quicker laugh with all the enthusiasm of a kid. Wayne was skilled at brazing, and I often pressed him into service fixing my ever cracking exhausts. I can still picture him standing there with torch and brazing rod in hand, talking about getting it to "flow". He rode a yellow Kawasaki H1, with an unforgettable wail that emanated from it's three expansion chambers. 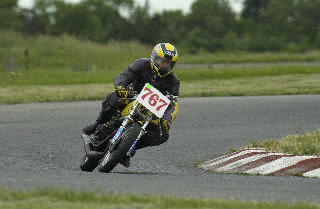 (Wayne on one of his beloved two-strokes)


Brian was a talented self-employed machinist. I asked him to help me make some spacers and brackets one time. I watched in wonder as he turned a hunk of aluminum into exactly what I needed. It was a sight to behold, a man in his element making something from nothing, taking a measurement here, spinning a dial there. I lamented those AP English classes that ain't done me no damn good and issued a silent apology to all the guys in shop class I made fun of. Not once in my life had I ever done anything with such skill and precision and made it look like child's play. This was a man that could create with his own two hands, see a problem and solve it on his own.

He raced a Suzuki T500, like I was at the time. This made him my early benchmark. If I could keep up with him or beat him, then I knew I was doing ok, if I couldn't, then I was not riding well. We had some great battles during the early years: 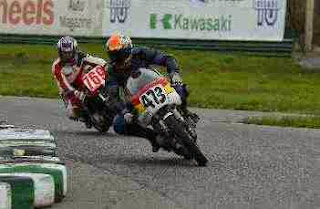 Through Wayne's simple act of offering me shade on that blistering day, I found the key component that was lacking in my race experience, camaraderie. The racetrack now was not only an arena to compete, but a gathering place to meet with like-minded souls genuinely pleased by your presence. I will never forget the giddy feeling wheeling in to the paddock on a Thursday night, smiling wide at people who understood exactly why you did this thing. Confederates who would lend a hand, parts, money to help keep each other going and then stuff you into turn one on Saturday. Maybe that's what they mean by community.