Don't Call It a Mid-Life Crisis

Maybe before going further forward, we should head backwards instead. How does one become a motorcycle road racer in the first place, and then decide to retire from it? That is a long yarn indeed. Motorcycles had been a part of my life since the age of 15, but my fascination with them began much earlier. I remember fighting with my brother over who would get to play with this green plastic dirtbike that had the coolest looking knobby tires you ever saw. We both had fantasies of owning hordes of these adult toys. Be careful what you wish for...

Suffice it to say that I was goaded into motorcycle racing by a friend of mine. I was in my mid-twenties and bored. Early dreams of skateboarding stardom were a distant memory washed away by injury, lack of talent and work ethic. I had a penchant for old motorcycles, born not of the love of historic things, but the reality of the affordable. At this time (late 90s) used Japanese motorcycles over 20 years old were cheap and plentiful and not considered cool or collectable as now (goddamn hipsters), and it seemed that there was an aging offering from the Land of the Rising Sun hidden in every barn and garage, awaiting the new dawn. I rode these clapped out, ill-handling relics all over the city streets until I had my fill of Philadelphia and did my best Return of the Native impression and escaped back to the Adirondack Mountains of upstate New York.

The crisp air and wide open spaces of the north country eased the boredom and restlessness to a point, but I found myself riding these old motorcycles faster and faster down pot-holed back roads, urged on 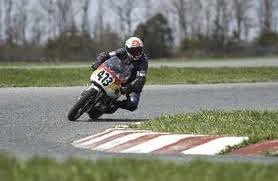 by the overwhelming need to push the flexi-framed machines as hard as physics would allow. There were several close calls, cars, deer, cops and pure over-exuberance on my part. I was old enough to know better but still young enough not to give too many fucks, as most of my faith in my own immortality was still intact. I had spoken to friends about my desire to try road-racing, and I was aware that there were others with the same sickness actually doing it on vintage motorcycles. I spoke more and more about it, saying, I am going to do that someday. Someday.

Someday came when the good friend I previously mentioned called me out on my bullshit. I will never forget what she said to me, "Well, you aren't getting any younger, why don't you stop talking and go ahead and do it for once?'". It was like a slap in the face and kick in the groin followed by someone opening a door in the dim and musty room you are standing in, light and fresh air flooding. Do it.

Posted by Kris Larrivee at 9:20 AM