This being Part V of a Racer's Final(s) Diary

I pull into the Advance Auto parking lot and shut the van off, knowing this is the best place to be if it won't restart.  I attempt, and it won't.  Battery dead.  I breathe a sigh of relief that I made it this far, as opposed to the alternative, lifeless on the side of I-81 with tractor trailers thundering by shaking the van and it's contents, threatening horrible, screeching, metal rending death.

The staff is friendly and helpful when I explain my charging issue and soon one of them is outside trying to diagnose which ill the van is currently afflicted with.  The employee struggles repeatedly to attach the cables to the battery, resulting in a spectacular shower of sparks as he attempts to weld the clamps to my chassis.  At one point I have to wrest the cables from him to stop his display of unintentional arc welding.  I know he means well, but for fuck's sake I don't need more problems than I limped in here with.

The diagnosis reveals what I already knew, the goddamn battery is dead, with only 315 cranking amps according to Advance's Speak 'N Spell battery tester, but the question remains, why?  At this point the employee's mechanical diagnostic skills are exhausted, as is my patience.  I ask if I can bring the battery in for charging and load testing.  He offers to remove it and I politely decline, telling him that I have the tools and will bring the battery in shortly.

Forty-five minutes of quick charging and one load test later reveal what I already suspected, the battery is good.  Time for an alternator.  At least I confirmed they had one on the shelf prior to removing the battery.  I remind myself to breathe.  Not for the last time. 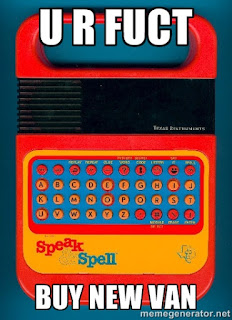 Posted by Kris Larrivee at 4:50 AM