What follows being Part 1 of A Racer's Final(s) Diary.


My cell phone alarm sounds shrill in the darkness and soon I am overcome by the standard wave of physical revulsion at being awakened when the world is still so absent of light.  This is accompanied not by the usual contempt bred through familiarity of my workaday life, but instead a new apprehension shrouds itself around my heart.  Today I make the 10 hour solo trek southwest to Leeds, Alabama and Barber Motorsports Park whereupon my labors will come to glorious fruition or ignominy.

My 21 year-old, 1-ton extended "creeper" van lies berthed in the driveway fully laden with two-wheel wares, collecting the heavy pre-morning mist and awaiting my call.  This piece of Detroit Iron, the "Heartbeat of America" as it were, (likely manufactured in Mexico and assembled in Canada) has served me well over the last two years hauling myself and motorcycles nearly 25 thousand miles in search of racing glory.  Today another 700 miles will be added to that total.

Thirty minutes after being jolted from restless slumber, my hair still shower damp, the van and I are rolling down the road, loaded to the gills like Okies escaping the Dust Bowl.  Despite the higher risk of fauna in the thoroughfare at these hours, it's still the best time to drive, due to lack of the human element.  In just a few short hours the highways will be overrun with Starbucks drinking, make-up applying, texting idiots swerving all over the place late for work.  I want to get in 200 miles and be well on my way before then. 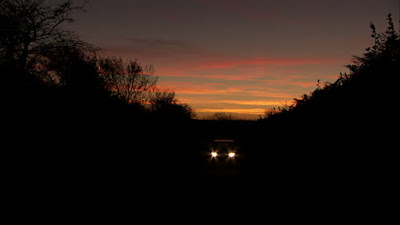