There was never reason to suspect that anyone had inappropriate intentions towards my 1976 Suzuki GT380 motorcycle.  It was ugly enough that passers-by would take it for abandoned.  In the interest of safety I used a padlock on the front brake rotor and also utilized the steering lock, a factory installed feature which prevents the handlebars from being turned, thus disabling steering.  Both of these deterrents had caused me rather embarrassing incidents when attempting to ride off without removing them, so I assumed any would-be thief should suffer the same fate.  And still, in my naive, whitebread country mind, the bike, on account of its sheer unseemliness simply could not be stolen.

It was a humid July night in Philadelphia, with the day's heat still radiating up from the dark, greasy asphalt.  My roommate and I sat on the rooftop of our dilapidated brownstone apartment building watching our Guatemalan  neighbors try to parallel park a Toyota Corolla.  This is more entertaining than it sounds, as they wedged that 1981 two-door up against another parked car and could not manage to free it before causing all kinds of damage to both vehicles, including the loss of a front bumper.  They had knocked my Suzuki down on two previous occasions, neither causing any real damage, at least none that would be noticed amongst twenty years of bumps and bruises from previous owners.  When finally the Guatemalans got the car free and parked it was well past 1am, and I retired to my bedroom to sleep.

I rolled and wrestled for hours, only managing to doze for a few minutes at a time, so awful was the heat and humidity in our non-air conditioned apartment.  I prayed for a thunderstorm to break the spell, with no luck.  At 4 am I went to the bathroom, urinated and splashed some tepid water from the faucet on my face and neck.  Something prompted me to stick my head out the bathroom window, which gave a clear view of the motorcycle under the dim streetlamp.  It waited silently next to the curb, and I thought I really need to go for a ride...

Instead I returned to bed and slept for about 4 hours, uninterrupted except the strange dreams in which I was vaguely panicked about something, but not panicked enough to wake up.  As the morning sun heated my room to levels even more uncomfortable than the night before, I rose and returned again to the bathroom.  I rubbed the sleep from my eyes and a voice inside my head told me to look out the window, which I did.  Odd, I can't see my motorcycle.  I must have parked it up the street a little more than I thought...

I started down the stairs still in my boxer shorts as a queasy realization began to slowly settle into my stomach like indigestion.  Still half-asleep, my brain was barely beginning to comprehend that something was wrong.  Apparently the optimistic portion woke up first, because some voice kept telling me that my motorcycle had to be there and I was starting to worry for nothing.

Out the side door of the apartment, into the alleyway, narrowly avoiding slicing my bare feet on broken glass, tripping over someone's goddamn garbage bags, finally making it to the street as the queasiness moved upwards causing my heart to race and pound and threaten to burst.  Standing on the sidewalk, naked except for a pair of boxer shorts with red hearts on them. Glance up the street, nothing.  Glance down the street, nothing.  My motorcycle was gone. 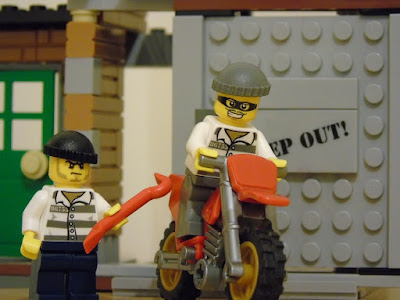 Posted by Kris Larrivee at 3:47 AM