A large part of the reason I started road racing was because I lacked the restraint to act like a civilized human being on the street.  Not in the wheelies in rush hour traffic on the interstate way, but in more of a tearing around on backroads hell bent for leather way.  Either one is stupid and reckless, so thankfully racing and off-road riding mostly sate my need to act a fool.  Most of my street riding now is just commuting to and from work.  Shouldn't be able to get into too much trouble, right?

The problem is, there are certain motorcycles that just beg you to be a hooligan, with mischief and wickedness a part of their make-up as surely as gears and alloys.  These are the motorcycles we remember, the ones that beg us to be bad.  I own a classic example of one of these anti-social machines: a 1982 RD350LC.

Never officially imported to the US, I found this one languishing in a garage in Ottawa, Ontario, Canada in 2007, in need of a motor rebuild and purchased it for the princely sum of $375 Canadian dollars.  We have had a rocky, tumultuous, passionate affair.  Immediately the LC began costing me more money than planned when it was discovered not only did it need a top end rebuild, but the crank was damaged as well.  And it didn't stop there.  Two hair raising seizures later, that both ended in 90 mph plus skids when the back wheel locked up, I discovered one of the cylinders had an internal coolant leak.  I threw good money after bad at this machine, ended up with at least five times its resale value tied up in parts.  This evil princess wanted to take me for everything I had.

I would probably let her, too, because the sweet two-stroke music it makes on the pipe, that feeling in the first three gears as it lofts the front wheel makes all the bad stuff go away.  It's almost impossible to resist doing a wheelie at every stop light, the rearward weight bias and light weight almost ensure it.  This bike makes me want to ride like a jackass, while struggling to be a mature adult.... 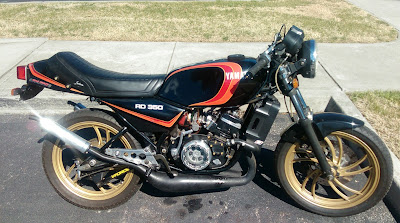 Posted by Kris Larrivee at 9:53 AM