This Is Spring Grove Part II

Charley is back there.  I can hear him.  His KTM is ready to pounce should I make the slightest bobble.  We reach the second grass track section, with built in wood pallet chicanes.  The Spanish and Austrian two-stroke 300s get to feed, I'm up into 5th gear.  Can't lose him.  Wide, sandy, sweeping left hander, he pulls up on the outside.  We are neck and neck.  It's dusty, can't see a damn thing, but my memory from last year tells me there is a sharp turn to the right coming up.  I back off slightly, Charley goes by, off track and right into some hay bales, but doesn't crash.  I make the turn, barely.  Relax and breathe for a few seconds.  He'll be coming again.  It doesn't take long.  He gets by and I try to give chase, but soon he is gone.  I'm not up to speed yet, fighting my own battles with the bike and the track, let him go.  My day will come.

I float around in 9th place for the first three laps, waiting for my second wind.  Can you really call it a second wind if you never got your first?  Now all my training begins to pay off.  The riders in front of me start getting tired, they slow down.  I'm on the move.  Eighth place.  Next lap sixth.  I see fifth place in front and follow.  He's faster in some sections, but I am faster in others.  He can't pull away, but for every little mistake he makes, I make one trying to capitalize.  For over 30 agonizing minutes we play cat and mouse.  Getting tired.  Finally he slows.  Make the pass.  Fifth place.  I'd be over the damn moon if I wasn't worried about him putting up a fight.  He doesn't.  Thanking my lucky stars and finishing the race in fifth, my best of the season. 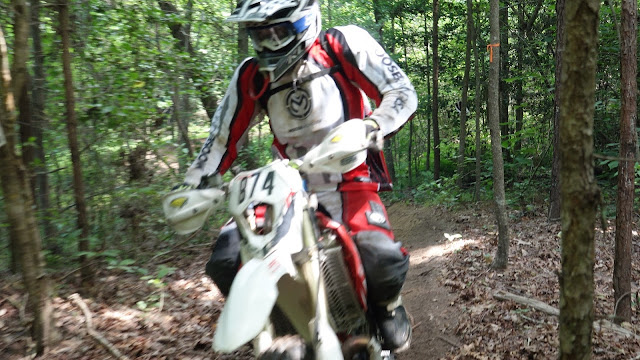 Posted by Kris Larrivee at 7:31 AM