I manage to get in about 20 minutes of run time on the EX500 before I become wary.  Despite the area being very rural, a few cars had driven by, drivers and passengers leering at the white van, out of state plates and the idiot dressed in full gear on the motorcycle with race numbers as the temperature soared above 90 degrees.  It was only a matter of time before someone called the local constabulary to enforce a cease and desist on my two-wheeled shenanigans.  When I was younger, flouting authority and rules seemed a worthwhile pursuit, but after getting a small sample of the weight the powers that be can bring down on an individual, and given the current attitudes of law enforcement, I have learned to pick and choose my battles and employ the stealth tactics of the guerilla.

So feeling like John Mellencamp before he dropped the Cougar, I load up the Kawasaki, shut the doors on the unmarked white van before anyone is the wiser and head back for the city.  The bike ran reasonably well, with just a small burble mid-throttle that indicated a carburetor adjustment was in order.  While not quite ready to declare the ignition problem solved, this was certainly a hopeful test.

There remained nothing left but to load the van and follow fate to Atlanta.  Things were beginning to culminate, the pieces, as they say, were coming together.  I took command of all the variables I could imagine, hopefully skill and luck would see me through.

I must leave you now, dear reader, as the rest of this story is unwritten.  In a few short days, the outcome. 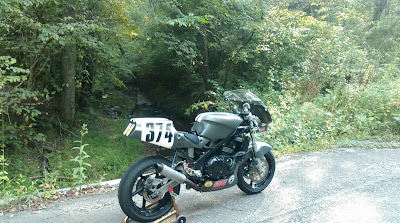 Posted by Kris Larrivee at 5:43 AM