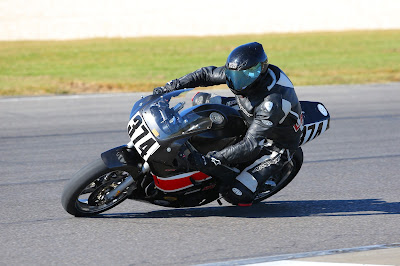 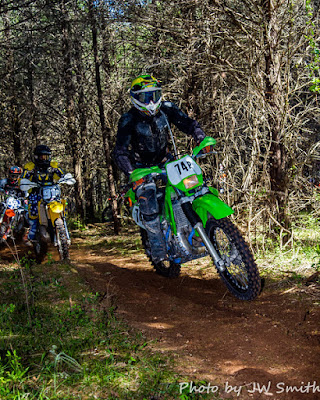 Someone asked me what the main differences are between road-racing and hare scrambles.  I had to think about it.  Aside from the distinctly visible ones such as terrain and machinery, off-road racing is more physically grueling than its pavement counterpart.  Two hours slamming around through the woods will whoop your ass more thoroughly than a day clipping apexes at say, Road Atlanta, as in the first photo above.

Cost and accessibility are two other major factors.  Simply put, hare scrambles are cheaper than roadracing and easier to get into.  In roadracing you have to attend a race school to get your license, bike has to pass a rigorous tech inspection as well as helmet and gear, but a person could just show up to a hare-scrambles with a bike, a helmet and fifty bucks and run like a madman through the forest.  You can undoubtedly get killed or go broke doing either, and I have concluded the risks are about the same no matter which you choose.

Generally speaking, there are a lot more immovable objects in the woods to crash into than on a roadrace circuit, yet speeds are much lower with single-track racing, like 100 mph slower.  But the thrill is the same.  25 mph dodging trees feels like dragging knees at 90. 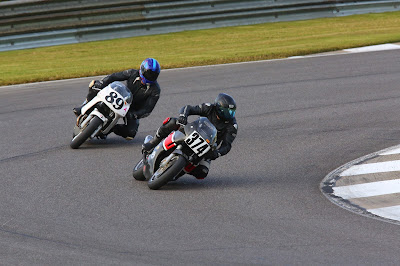 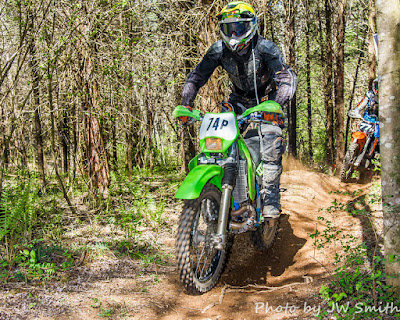 In conclusion, it is the similarities that prove far more intriguing than the differences.  You are out there competing against guys whose only goal is to beat you.  You have to be mentally, physically and even emotionally prepared, because racing in all her forms is a cruel, vicious mistress that does not give up the goods easily.  And while the skillsets may differ, the main requirements do not: focus, dedication and heart.
Posted by Kris Larrivee at 5:10 AM