I said hello again to the Adirondack region of upstate New York specifically for the purpose of saying goodbye.  Otherwise there would have been no cause for going back.  It's the part of NY that everyone forgets exists, and despite great natural beauty, there is little else there in the way of economic opportunity, development, or forward thinking.  Fit for the Jerseyites to go drunken cavorting on their snowmobiles during the weekends, only to hightail it out on Sunday night.  Like many rural areas of the US it has been simply forgotten and left to its own devices.

Still, not a bad place to grow up, with plenty of land to go tear-assing around on dirtbikes and such, without too many cops or too much population density.  But it was the kind of locale you had to get the hell out of after high school, lest you become trapped in a hardscrabble existence going nowhere.  The small town trap.  It welcomed you in with open arms.  It called you back years hence.  And it always sought to hold you down.


Great men are often not remembered in the pages of history.  Their bank accounts are often not the stuff of legend.  News programs do not sing their praises.  That is because to be a truly “great” man requires something not easily defined, categorized or applauded in the myopic media world.  It requires a depth, a richness of character and integrity, the fearlessness to dream outside a narrow mainstream and labor quietly for the fruition of visions despite naysayers and conformists.  A desire to shape a small part of the world according to the calling of his own heart, rather than accepting things at face value.  And a willingness, always, to be wrong.  The steadfast courage to make mistakes and then gain wisdom from each in turn.  Never content just to do things his way, he strove to do things a better way.

That was Phil.  He possessed an uncanny ability to see solutions where others saw only problems.  In a disposable world, Phil fixed things that others deemed beyond repair.  In a world of pre-packaged fun, Phil created his own and showed us all it wasn’t who owned the latest, greatest (and most expensive) toys, but who had the most fun with what they had made.  Over the years his creations, motorcycles, trikes, snowmobiles and buggies all shared the unique flair and function that Phil was renowned for, each one of them built not bought.

Our more than twenty year friendship began when I purchased a motorcycle from Phil.  I was 23, and broke, with visions of motorcycle racing glory.  I didn’t have the meager asking sum of three-hundred seventy-five dollars for the old Suzuki in front of Phil’s house.  I had two-hundred, and promised to return with the rest as soon as possible, under one condition: Phil had to help me turn this street bike into a real track racer.  He looked at me like I was nuts when I told him I was going racing.  He didn’t believe me.

Two weeks later when I showed up with the rest of the money and promptly asked him to start hacking parts off the machine, he knew I was serious.  At first he tried to dissuade me, telling me to stay on the streets and off the racetrack, but I held him to his promise.  And that wonderful man more than delivered.

Over the next ten years he developed a tame commuter machine into a thoroughbred race winner, not without bumps, bruises, and blowups (from the engine and occasionally me).  Quite often, I could be a real pain in the butt to Phil (and Lucy!), turning up with some impossible mechanical problem or another, some insane deadline to make the next race.  Instead of showing me the door or suggesting I figure it out on my own, Phil would give that knowing look and say “unload it and let me see.”  After which Lucy would always end up patiently feeding the both of us.

Our goal was to win a championship.  We came very close in 2007, but a crash and the resulting injuries prevented us from doing so.  It wasn’t until eight years later, in 2015, that I was finally able to win not one, but two national number one plates on machines I prepared using the methods Phil taught me.  Though he could not be there to hear it, I thanked him during every podium ceremony I was part of.  I still do.  Because without his knowledge and patience, none of it ever would have been possible.  Every time I pick up a wrench or encounter a conundrum, a part of Phil is there with me.  I try to think about how he would have done it, always looking for the better way.

In the end, the real measure of Phil’s life comes not in an accumulation of wealth, power or accolades, but in the wisdom and joy he helped to spread through his unique and marvelous way.  And the lives he forever changed for the better by doing so.  I am but one such life among many.

We lay to rest not only a son, a brother, a father, a husband, a teacher and a friend, but a visionary.
A truly great man. 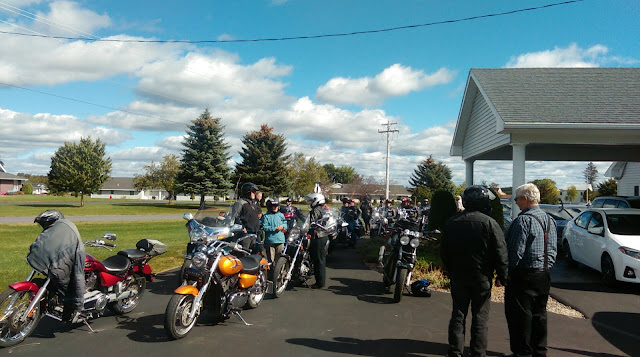 Posted by Kris Larrivee at 6:51 AM