I've always thought of myself as a serious, but sportsmanlike and fair competitor and have striven to maintain that image.  My racing career began in stock cars on short track asphalt ovals where bumping, banging and straight up plowing into each other was acceptable and encouraged, and the lesson was soon learned that not everyone cared to be thought of as "clean".

Graduating from competition on 4 wheels to two wheeled roadracing was eyeopening.  Passes were things of beauty, racers respectful and concerned with how others reacted to their moves on track.  Sure things could get heated on rare occasions, but these instances were almost always handled with tact and dignity.  It was truly a gentlemen's sport, for the most part.

Transitioning to hare scrambles racing in 2016 I found it to be a little more rough and tumble than the roadracing world.  Passes were closer, there was more "rubbing" from the other competitors, but nothing I felt was dirty or overly aggressive.  It is racing and it is well known that the only place the guy behind you wants to be is in front of you, plain and simple.  The only thing in question is what he is willing to do to get there.  What are you willing to do?

I'm willing to do what it takes, within the confines of safety and reason, willing to use any and all means at my disposal.  Winning is paramount, but not more paramount than going to work in one piece on Monday morning.  That said, short of taking each other out, a little heavy petting amongst fellow riders is a perfectly acceptable thing.  Close the door to make a pass?  Sure, just leave a little bit of room to spare.  Capitalize on another rider's mistakes, exploit his weaknesses?  Hell yes.  Ride over a fallen machine to get by?  Of course.  All the normal cut and thrust of woods racing.  And still perfectly clean and fair.

So you can imagine my surprise when, upon returning to the pits at the completion of the VCHSS Peninsula Classic hare scrambles race (where I finished 3rd) a rider in my class approached me, still in full gear, red-faced, chubby and sweating and began screaming and cursing at me for being a "dirty racer" and "banging bars on the start" (video review of the start reveals we were nowhere near each other).  He also informed me that everyone else in my class was "sick of me" and that he was going to file a complaint with the officials.  Taken aback, I hesitated while pondering a proper response.  Initial visceral instinct may have been to knock him on his loud mouth ass, but obviously that was a no no.  I truly had no idea what incident during the race he was referring to, or what I had done to make him so terribly upset that it seemed he might cry.  There were families and children all around us exposed to his foul mouthed tirade and posturing.  In hindsight, what he really wanted to do was make a scene, and he certainly did that, in front of a nice sized audience.  Had he approached like a man instead of a petulant child looking for attention, we could have discussed his issue and possibly come to an understanding.  Rather, he preferred to make some noise and threaten to go tell mom.  That's his prerogative, but throwing a tantrum in front of a bunch of random people and calling someone names certainly never helped anything.

I've thought long about my response to this incident.  I considered letting it slide and going on about my life.  It's a rather small annoyance in the long run, but an annoyance nonetheless, one that could have negative repercussions in the small racing community in which I find myself.  Some answer is necessary.  I've neglected to name names or post competition numbers, in case the offended offender should decide to sack up and hash this out.

So, after careful deliberation, my response to those who deem my racing "unfair" and wish to whine about it is best summed up in a picture: 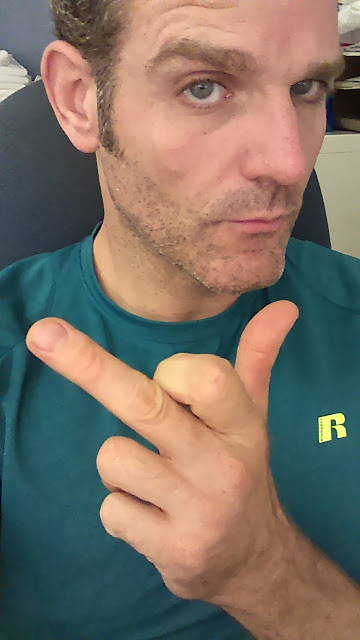 Posted by Kris Larrivee at 5:14 AM