I'm not last for long.  As we come to the woods section of the course I pass five riders.  Great, that leaves only eight guys in front who have quite a head start.  I know the slick, rocky hell that we are all about to descend into.  This is scheduled to run five laps, but I have a feeling it will be more like four once the track deteriorates into a rutted mess.

If there is one thing I've learned in the eight hare scrambles I've raced prior to this one, it's that trying to go fast will get you into trouble quick.  Instead, I make myself relax and focus on riding well, not making mistakes and not falling down.  So many times some hot shoe with a fire under his ass hoots and hollers by, then goes sailing down the trail and bounces off a tree at the next corner.  I've also learned to stop being nice.  In the woods the law of nature rules and he who can make his own way waits for no one.  I no longer queue behind stopped riders hoping for them to find a path, I am coming through.

I pass two or three more competitors in my class on the second lap and find myself behind 39p, Juan, my arch nemesis.  I can see he is trying hard, too hard in fact for the conditions.  I let him wear himself out.  We exit the forest back into the grass track section.  Time to see if this 300 has any legs.  I am all over Juan for the first couple of turns.  It feels like roadracing to me, 6th gear pinned, bike headshaking as we hit braking bumps.  Finally I've had enough, run a tighter line into a second gear left hander and blast out of it, wheel aloft, passing Juan.  It's a satisfying moment, but I stifle my joy, because this is usually when I fuck up and crash.  It doesn't happen, in fact I pull out a decent gap and never see him again.  The digital scoreboard tells me I am in 4th place at the end of the lap.  Gaining, but 4th still sucks.

Into the dark of the forest again, back to the suffering and pounding at the hands of these damn rocks.  I stall once or twice, but the Gasser lights quickly.  I have not crashed yet.  Taking my time, picking my lines, going fast where I can and slow where I need to, all the while telling myself to breathe, sitting down on smoother sections to save energy.  I take no chances and force my mind to stay sharp, avoiding stupid mistakes.  Steady, solid, try to light the world on fire and you will only burn yourself.  Next lap I am up into 3rd, scoreboard says 2nd is ten seconds ahead.  This is more like it.  Time to catch him.

And catch him I do.  It's a KTM rider who is going blisteringly fast, but keeps falling down.  I unintentionally smack his bike as I go by, taking his handlebar in the left radiator.  He falls on the side of the course, I continue, and in trying to put some distance on him, make a dumb error and fall.  Nothing major, my left hand is quick on the clutch to keep the Iberian Enchantress from stalling, but it gives him just the opening he needs to get by.  And he his off again, like a pumpkin rocket from hell.  Then he really is off again, bouncing into a small tree and landing his bike directly in the singletrack.  He is trying to lift it up, blocking the only line.  I have a choice to make.  I can either stop and wait for him to remount, or I can go over.

I opt to go over.  I loft the front end slightly, just bouncing it off his rear wheel, and then proceed to ride over the entirety of his bike, from stern to stem, noticing briefly the really trick looking expansion chamber on the KTM.  I feel bad for about three seconds.  If you are going to lay that thing down in front of me, I am going to treat it like trail debris, no matter how shiny.  I would expect no less from my competitors, which is why my bike looks like it was pulled from a dumpster.  This ain't no beauty contest, and remember, "Rubbin' is racin'."  The tactic seems to have worked, because I don't see him again.  But there is a new wrinkle.

The earlier tussle with his handlebars has damaged the filler neck on the left radiator and the cap is no longer sealing.  Coolant is puking from the cap and I have another decision to make.  I can relinquish and give up this second place finish, or we can find out just how tough the Spaniards build these things.  After my aggressive hop over the KTM, my blood is boiling along with my coolant.  Screw it, I've got a few weeks off after this race, I will rebuild it if necessary.  It smokes from the antifreeze hitting the scalding pipe, tone of the motor changes.  Keep going until it quits, then push it.  Must finish.  The Gas Gas loses power and starts to idle funny, getting hotter, but it finishes the race in one albeit overheated piece.

I never catch 1st place and finish in second about a minute down.  I am duly impressed with the machine's performance.  I look forward to many more races with the EC300, but let's start winning, shall we? 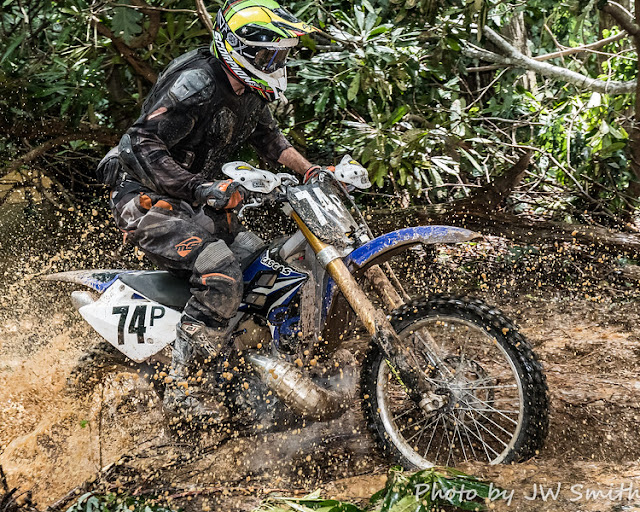