At least half a dozen times in the last year, racers have come up to me in the pits asking to borrow items, ranging from a battery charger (loaned out to three separate persons on different occasions), radiator clamps, duct tape, bolts, nuts and safety wire.

I am always happy to help someone out, as are most racers and I know most would help me as well.  Recently though, it seems I am doing a lot more loaning than borrowing.  And many of the ones doing the asking are people driving late model diesel pick-ups with million dollar bling wheels towing Toy-haulers filled with several race bikes covered in sponsor stickers.  It strikes me as funny and ironic that these seemingly well-to-do racers with all the fancy gear are coming to the guy with the 20 year old van and 25 year old race bikes to borrow things they can't be bothered to pack.  What's even funnier is what they all say when I pull out the simple little necessity that escaped their packing list:

"I knew a vintage guy would have it."

How is one supposed to respond to this statement?  Is it a testament and compliment to the preparedness of the vintage racer?  Or is there a more backhanded meaning, i.e.: that we need more tools/parts/spares because our machines are more likely to break down, or that we look like a bunch of Okies travelling Jed Clampett style with the kitchen sink strapped to the hood?  Perhaps a little bit of both.

However you choose to look at it, one thing is clear, vintage motorcycles require more involvement from riders than modern counterparts.  Whether it is tracking down parts, doing plug chops and changing carburetor jetting, a vintage racer needs to be a perceptive rider, deft tuner and part-time alchemist.  Modern motorcycles have become appliances in their reliability yet complicated in their technology.  In many ways this is a good thing, allowing a rider to focus entirely on his job: riding the motorcycle.  But it also removes the rider from a certain intimacy with his machine.  Take it to the suspension guy for adjustments.  Have the tire guy mount and balance your tires.  Need your fueling remapped? Take it to another guy.  Time for an engine rebuild? There's another guy for that.  Paintjob? Got a guy for that too.  All that specialization removes an element of artistry and scholarship from the mix.

Not so the "vintage guys".  Many of them build their own engines and do all their own tuning.  They can lace wheels, degree cams, and mount tires as well as ride the damn thing at the very limits of sanity and obsolescence.  Years of knocking about at the racetrack have taught them a thing or two, hence the bins full of what appear to be redundant or useless items.

Remember that when you come up to one and ask to borrow something.  You could learn a lot from a "vintage guy". 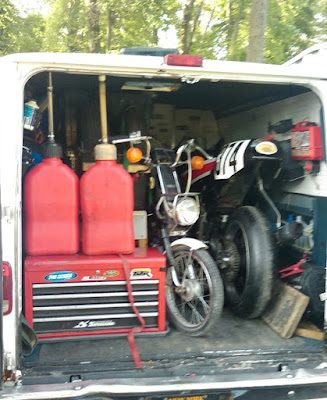 All my shit is old.  So fucking what?